Update: The demolition up the road has continued apace. At one point it was like being in the vicinty of an earthquake. Our house was literally shaking. So much so that I stormed off to give them a piece of my mind. "We're demolishing a house lady", was the gruff reply.  Well yes but could you do it a bit more gently? This is what the poor house looks like now. 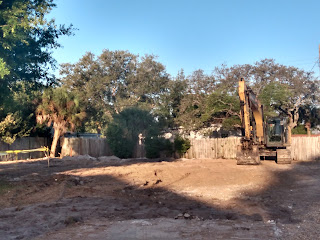 It turns out there was so much noise because they were also demolishing a (presumably perfectly good) swimming pool. That is apparently even harder to demolish than a house. And then the new house will surely also want to a pool so they'll have to start digging all over again.

Our  short cul-de-sac, or dead end street, as they call it here is in chaos. The house on the corner is being renovated, the people opposite are having a swimming pool put in and two doors down they turned up this morning and are in the process of demolishing the poor little place completely. This is happening everywhere at the moment. On our walk the other morning we met a wild-eyed man shaking his head, "Every time I come by here, another house has disappeared. I'm scared to leave my house in case it's not there when I get back!" I know how he feels.

The result is trucks, lorries, backhoes and bulldozers waltzing back and forth all over the street with their incessant beeping. You take your life in your hands trying to weave your way through them. Every so often there's a crash and a bang and a crunch and then the infernal beeping starts again. Oh for some peace and quiet. 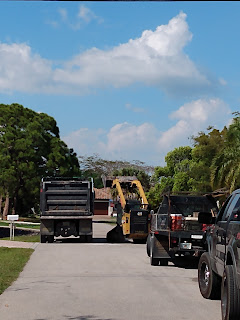 (And that's not counting the usual leaf-blowers, strimmers, chainsaws and lawn mowers from all the different gardening firms. Plus the chap behind us who has some kind of hobby involving a nerve-grating electric saw which he always brings out at lunchtime. At least the gardening part is usually over quickly here, unlike the lawnmowing fanatics with their rolling acres up north.)

I hope the results will be worth it. Everyone is happy with the house on the corner, which is of the mid-century "Sarasota school". 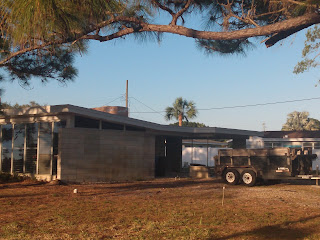 Encouragingly they are bringing it back to its original design,  after it had spent years suffering under ill-advised alterations with the wrong sort of roof completely.  Sadly the house being pulled down wasn't considered worthy of the same treatment. I just hope they don't replace it with  some giant monstrosity squeezed into a small space, which seems to be the trend, so they can show off to the neighbours. These neighbours won't be impressed.

By the way hubby has just come in with an anecdote from his barber. Apparently a chap on Casey Key, the local billionaires' row, didn't like looking at the yellow house next door, "I'll give you five million for it." he said to the owner. "Not for sale", said the owner. So the original chap moved so he wouldn't have to look at a yellow house. The problems some people have.