I am suffering from a certain lowness of spirit after the debacle at Old Trafford today (please don't mention football to me ever again), I'll distract myself by getting on with telling you about the road trip.....

It was good to be on the road again - almost like normal times, heading south in sister-in-law's huge, magnificent SUV, stuffed with chairs, bicycle wheels, boxes of books and china, hubby's old cowboy boots et al. The first day was rainy - no spectacular autumn colours this time, so we cut it short and stopped to see friends in West Virginia. The next day -after Sunday Mass at St Leo's, Inwood, a magnificent modern church with some nice traditional touches, lone and stately,  surrounded by fields,  the congregation dutifully masked up - was a great improvement. A chilly start but the sun warmed up the countryside - Virginia now -  with its very English-looking towns like Flint Hill and yes, Winchester, steeped in history as far as American towns can be and black cattle grazing in well-fenced fields.

And as always a road trip is full of surprises. In one village we saw something was going on and slowed to take a look. A farmers' market? A fair? 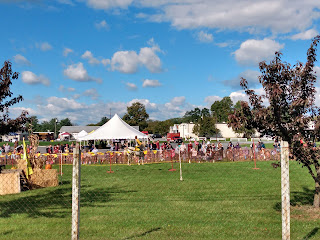 "Gosh!" I said to sister-in-law, "they're jousting! 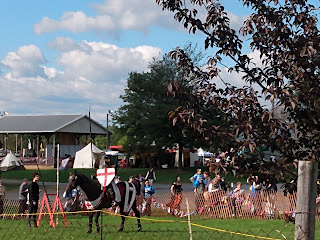 We looked on as two knights - on rather lighter horses than the real thing - amicably crashed into each other and came back for more. (Well it was a bit hard to get a good photo from the road). 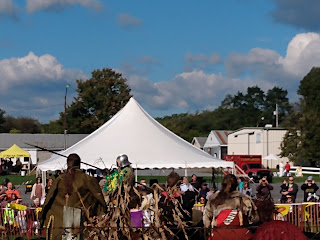 That's Virginia - a little bit of Olde England.
to be continued....
Posted by Alenka at 5:42 PM