A Jaunt Through the Jungle

There's nothing like exploring the wilds of Florida - and believe me, they're still some wilds left - on horseback. And the weather's just perfect for it now. So a couple of times recently we've loaded up the Windsong Farm trailer with its amenable cargo of Cheyenne, Digger, Teagan et al and descended on the local nature reserves. 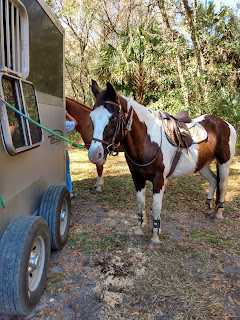 First was a foray into Myakkahatchee Creek Environmental Park a little way east on 1-75 and which gained some notoriety last summer as the site of the police search for Brian Laundrie, who'd murdered his girlfriend out west - a sad story that captured the headlines for weeks. Then it was the summer rainy season and the park was flooded, one huge, practically impassable swamp. Grisly remains only came to light when it started to dry out. Now, in the winter, it  turns into a picturesque jungle of palm tree groves and old oak trees draped with Spanish moss, with just the occasional rustle in the bushes to remind you that this is no city park. 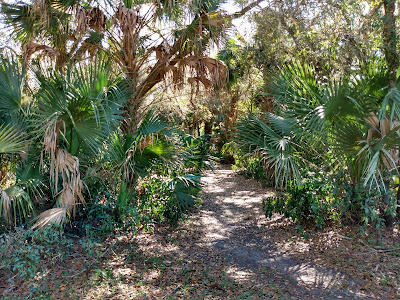 Soft paths meander past ditches of murky blackness. The dry palmetto fronds rustle, the occasional snake slithers out of the way and the horses are constantly on the alert, ears pricked, well-attuned to real or imagined danger. Once, on a previous ride, Teagan shot straight upwards like a firework from all four legs. I never saw what he'd seen but he may have had good reason. Fortunately he landed in the same place. 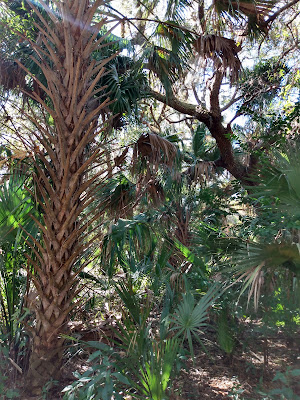 Prairie Creek Preserve is closer and here we ride  among trees trailing thick vines (the old Tarzan films were made here) along the wide, languid Myakka River, looking much as it would have done centuries ago with the odd alligator basking on its sandbanks -  or, on this particular day, swimming nonchalantly along - vultures wheeling and a heron fishing in the shallows. The water is brackish - the horses won't drink it but alligators don't mind. This last time, an armadillo trotted across the path - a little visitor from prehistoric times (I saw one once, click-clacking across the road in our neighbourhood). Here many of the sandy paths are churned up by feral hogs and we wonder at large feline footprints. Probably bobcats rather than panthers. Then briefly back to the real world and hikers smiling, "What pretty horses!' and a girl with a tiny, panic-stricken Pomeranian thrashing in her arms, "He's never seen a horse before!" Then it's quiet again, just us and the meandering river, glimpsed through palmetto fronds. "I can see bubbles!" Jennifer said, craning her neck, "Oh" she said, "Not an alligator", as a lone kayaker paddled past. Believe me I would not like to kayak on that river. You're much safer on a horse.
Posted by Alenka at 7:42 PM