All right, it's not like Up North with its bombogenesis but when Florida gets cold, it really feels cold. Once you winter in a warm climate you lose a lot of resilience. Plus you don't have the right clothes. Especially if you've just come down for a couple of weeks in the sun. (I saw a woman walking her dog this morning wrapped up in what looked like a long woolly dressing gown. "Don't look at me!" she said, "It's all I had!") Over the weekend temperatures overnight dropped to freezing. Before that, hubby and I had rushed around covering flowers with sheets - like wrangling with a runaway parachute in the blustery winds and trying to weigh it down with paint cans and hubby's boat anchor. Others had the same idea.  Some of the streets looked like one of those horror films with Egyptian mummies, except they were wrapped plants and bushes.  On Saturday, down at the beach,  the Gulf was all whitecaps and the wind shrieked around our ears. 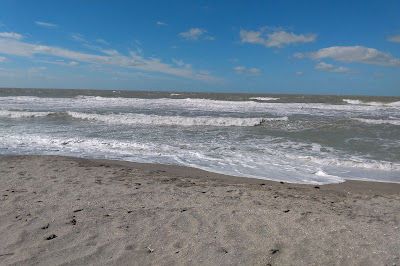 On Sunday there was supposed to be a gathering - after a long gap - at our beach access. No buffet because of You Know What, just bring yourselves and your own drinks. It was fun but only a few people showed up. I thought it was because of the cold but it turned out there was a football (the American kind) game with the Chiefs playing the Bengals. Apparently the Chiefs got their just desserts after their cruel victory over the poor Buffalo Bills last week.  It was a lovely evening, the sea much calmer but too cold to stay for the sunset. 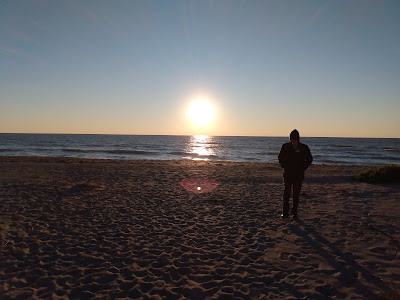 And this morning there was frost on some lawns, cars and roofs but not on others. And when we uncovered the flowers, we'd lost the contents of just one planter but not the others. Odd, that. Of course freezes in Florida always bring out the Frozen Iguanas stories. I notice the British media loves them.  Here they are old hat. Yes the frozen iguanas do fall out of trees but I've never heard of anyone around here being hit on the head by one. In fact no one around here has actually seen a frozen iguana. Though they do exist, I'm sure. And most of the iguanas recover. What puzzles me are the instructions to drag the iguanas to a safe pot by their tails. If they're an invasive species why are they telling people to rescue them? I hasten to add that if I saw one I would rescue it too, being an alien species myself.