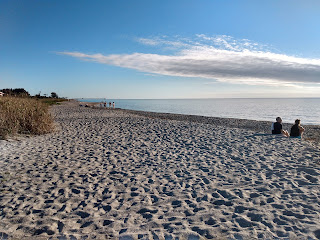 That's what everyone's saying. Sounds familiar?  "I feel like a sitting duck", my neighbour said gloomily  as we all await the Omicron Tsunami. Still, it was a beautiful Christmastide in Venice - sunny and warm almost every day and plenty of signs that people were getting together with their families. The joggers and runners appearing on the streets, kids looking for sharks' teeth on the beach and wobbling along on their new bikes, the unfortunate frequency of private jets screaming into little Venice airport and fireworks going off at all hours and not just on New Year's Eve.  Evidently the adults have all had electric bikes for Christmas - they are everywhere, creeping up on you silently with their sinister fat black wheels. A friend estimated they now constitute 80 per cent of the traffic on the bike trail. It seems to defeat the purpose of riding a bike in the first place.

Meanwhile I've been counting the different modes of transport for Santa - no electric bikes as yet but so far among the spottings this year a jet ski, an aeroplane, a steam engine, a sailing boat  and of course an elephant, which I pointed out last year. 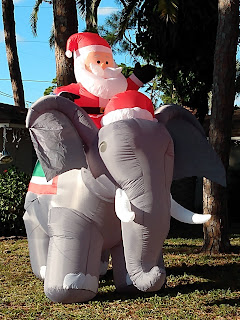 We will keep our lights until the 12th day of Christmas as usual - though the Epiphany now apparently falls on the 2nd of January, the nearest Sunday to the 6th, because they think people are too lazy to go to church on the 6th. Not true here in Florida I'm sure.
Happy New Year!
Posted by Alenka at 10:25 PM