Taking the Train in America

Is not what it once was. Apart from a few commuter routes, few people take trains any more. There are still railways tracks all over the place in western New York but they're mainly used by freight trains, endless and slow and emitting eerie  hoots as though lamenting  a gilded age long past. Gone are the great passenger railroads with names like the New York Central and the Erie Lackawanna. Nowadays there's just something called Amtrak, which is run by the government - at  a loss.

Once Buffalo had a grand Central Terminal

With a sumptuous, gilded interior...

...now stripped bare, while the building stands, gutted, in a wasteland despite valiant attempts to find a use for it. Nowadays, this is Buffalo's passenger railway station, hidden in an inner suburb, almost embarrassed to be there.. Though it does have a handsome buffalo outside. 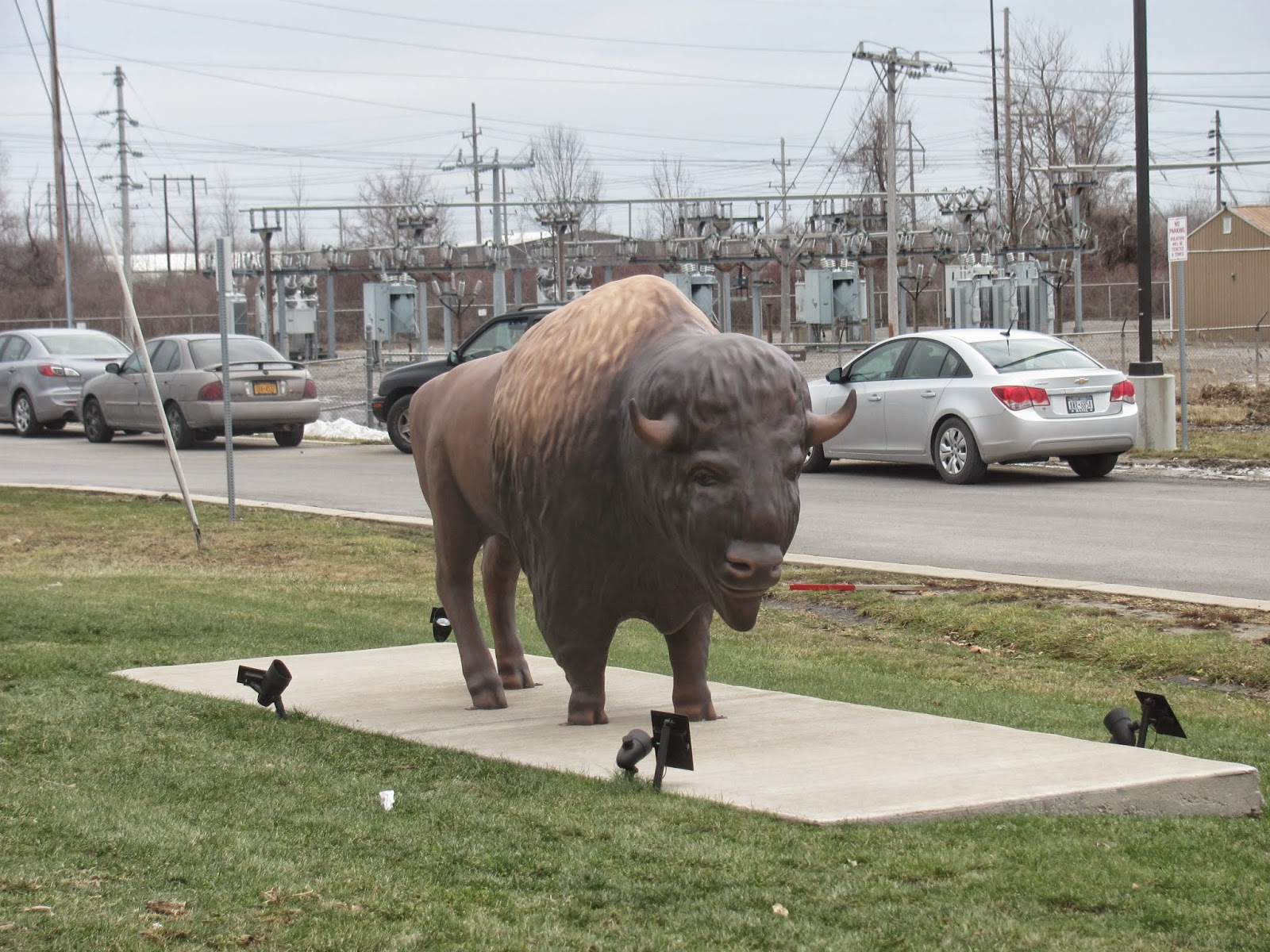 We were meeting our Christmas visitors who were coming up from New York City. It took them more than eight hours of agonised stop-start. Two hours longer than it would take by car.Take that journey and you'll never complain about Virgin Trains again.
We waited by an unprepossessing sign. 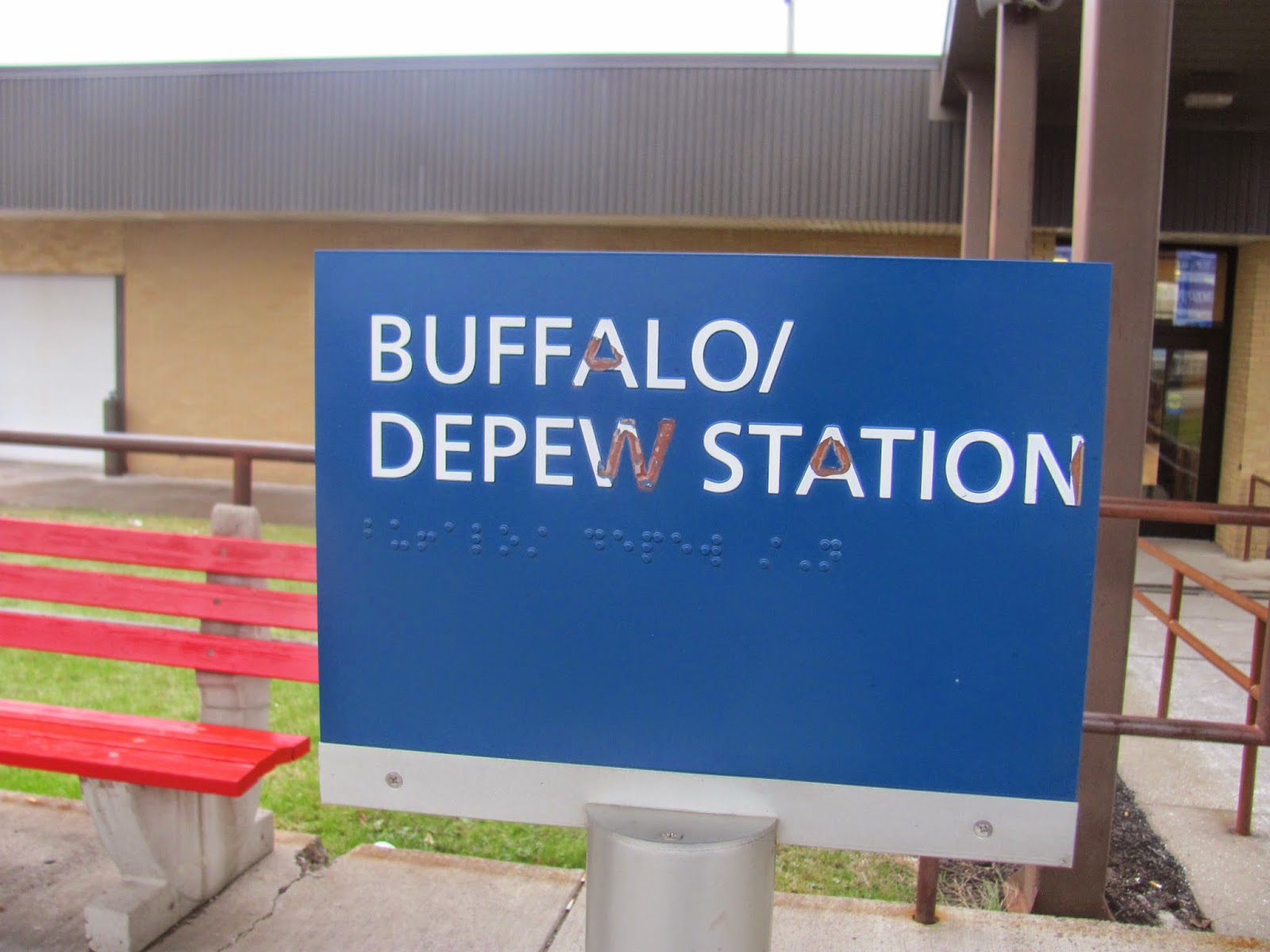 On a lonely, windswept platform. 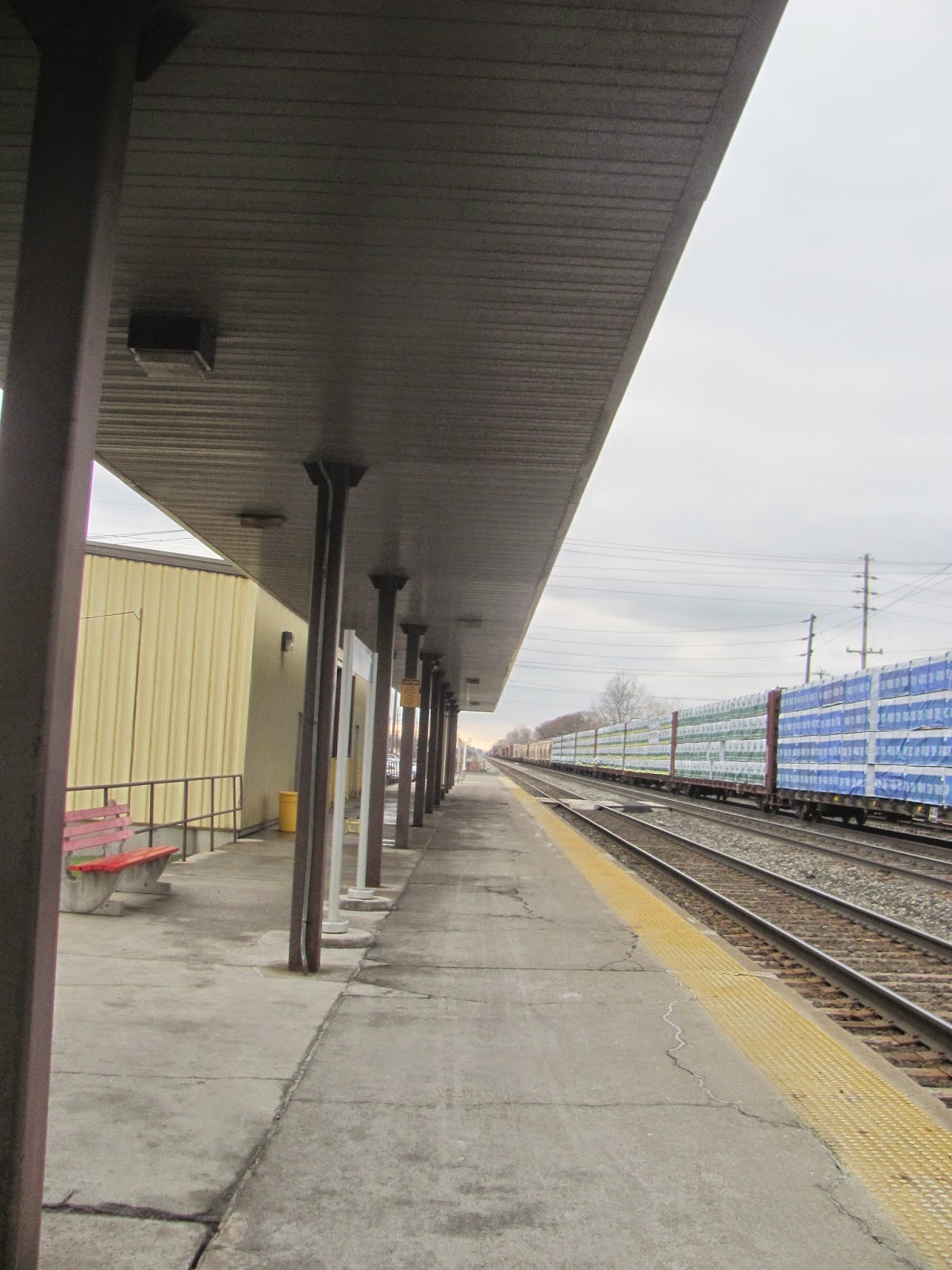 Though the train, when it did come in, slowly, slowly, was an impressive sight. Big, mean and muscular and doing its best. 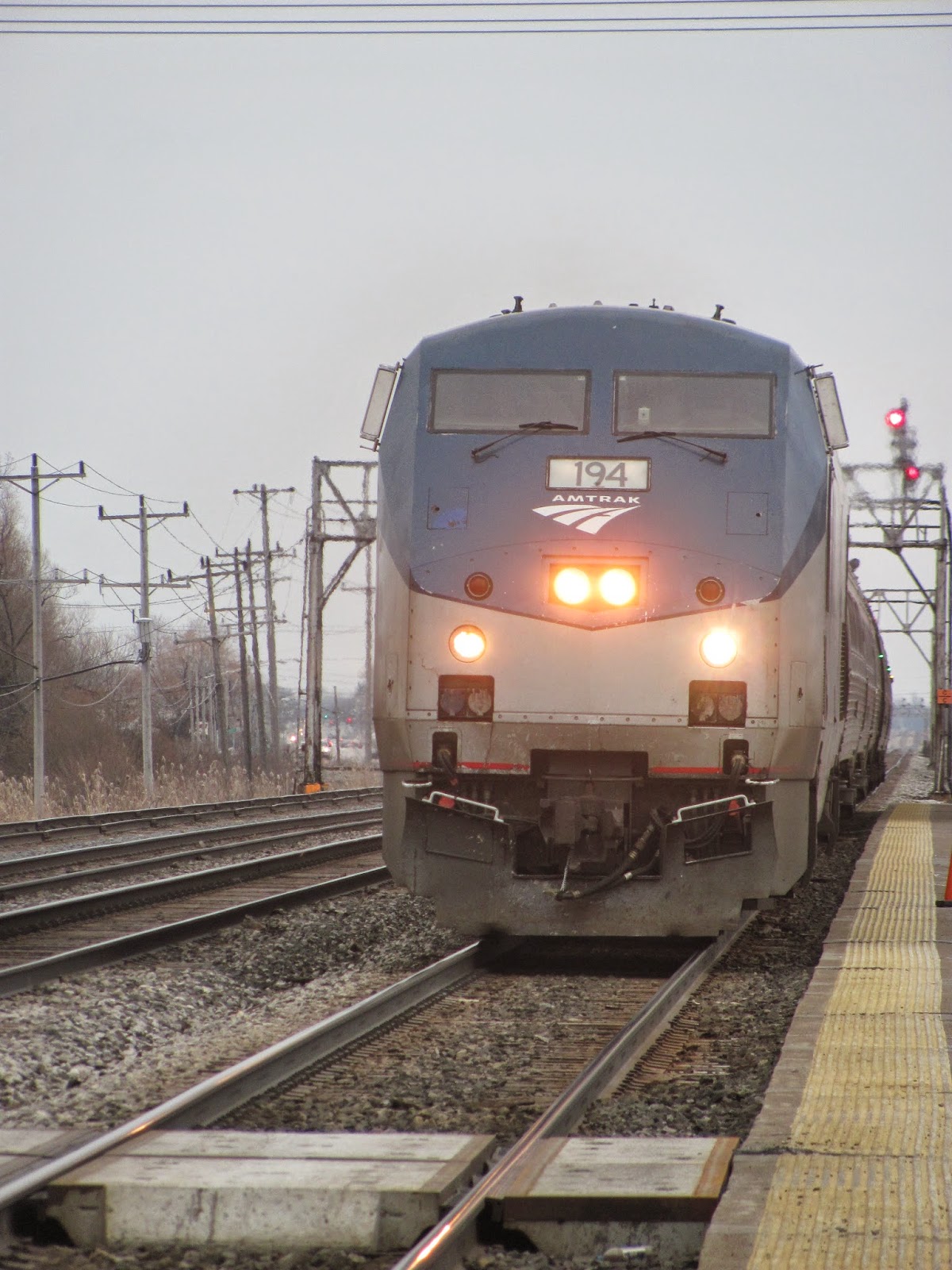 A few years ago, I too tried an American train, travelling a slightly shorter distance from Buffalo to Albany.  I'd  fantasised about cow-catchers fronting the engine, dining cars laid with heavy silver, pursuing Indians launching flaming arrows, even, perhaps, a silent movie starlet tied to the track
It wasn't quite like that though one compensation was that  our train had a name, the “Lake Shore Limited”, which sounded scenic and glamorous.  In fact, as I discovered, “limited” just meant it didn’t stop everywhere.
An official wandered around telling us the “car” (carriage, that is) for Albany would stop alongside the fourth lamp-post on the platform. Apparently everyone for Albany had to get into the same carriage, even if the whole train was going there.
“Just look at the state of those tracks,” hubby observed, “We’ll be lucky to get there without being derailed”.
Then, bell clanging, in rumbled the behemoth, amazingly right on time, its massive engine towering over us. Climbing the steps up was like scaling the Matterhorn. (They provide a sort of footstool to help you get on and off.) The train windows looked grimy compared to British ones, which was quite a feat. The seats had footrests, which, hubby remarked, could only have been designed by the government.
Disappointingly, the Lake Shore Limited had already skirted the promised scenic waters before we joined it. But the countryside was lovely and we did trundle along beside the Erie Canal, once a great trading thoroughfare and the old, church-spired cities of upstate New York, names reflecting their former grandeur:  Rochester, Syracuse, Utica, Rome.
I was reading the information I’d got off the internet. “Wow!” I exclaimed, “There’s actually a dining car! I’m going to check it out.” Hubby didn’t believe me. But a dazed-looking guard in a waistcoat pointed to the back of the train.  I lurched through the bumping carriages, past a seedy buffet full of loud beer-drinkers. It didn’t augur well. But then, finally, lo and behold, there it was. A proper dining car. There were curtains at the windows, pretty lamps, linen napkins and  little sparkling lights in the ceiling. The menu proudly showed the silhouette of a romantic couple with a Great Lake in the background.
Yes, in the mode of American transport that time forgot, there was something remaining of its storied past.
I don't know if they still have dining cars. Our friends didn't mention one. But they did admit to enjoying their trip - in a funny sort of way. it seems sad that Americans are so wedded to their cars and planes. 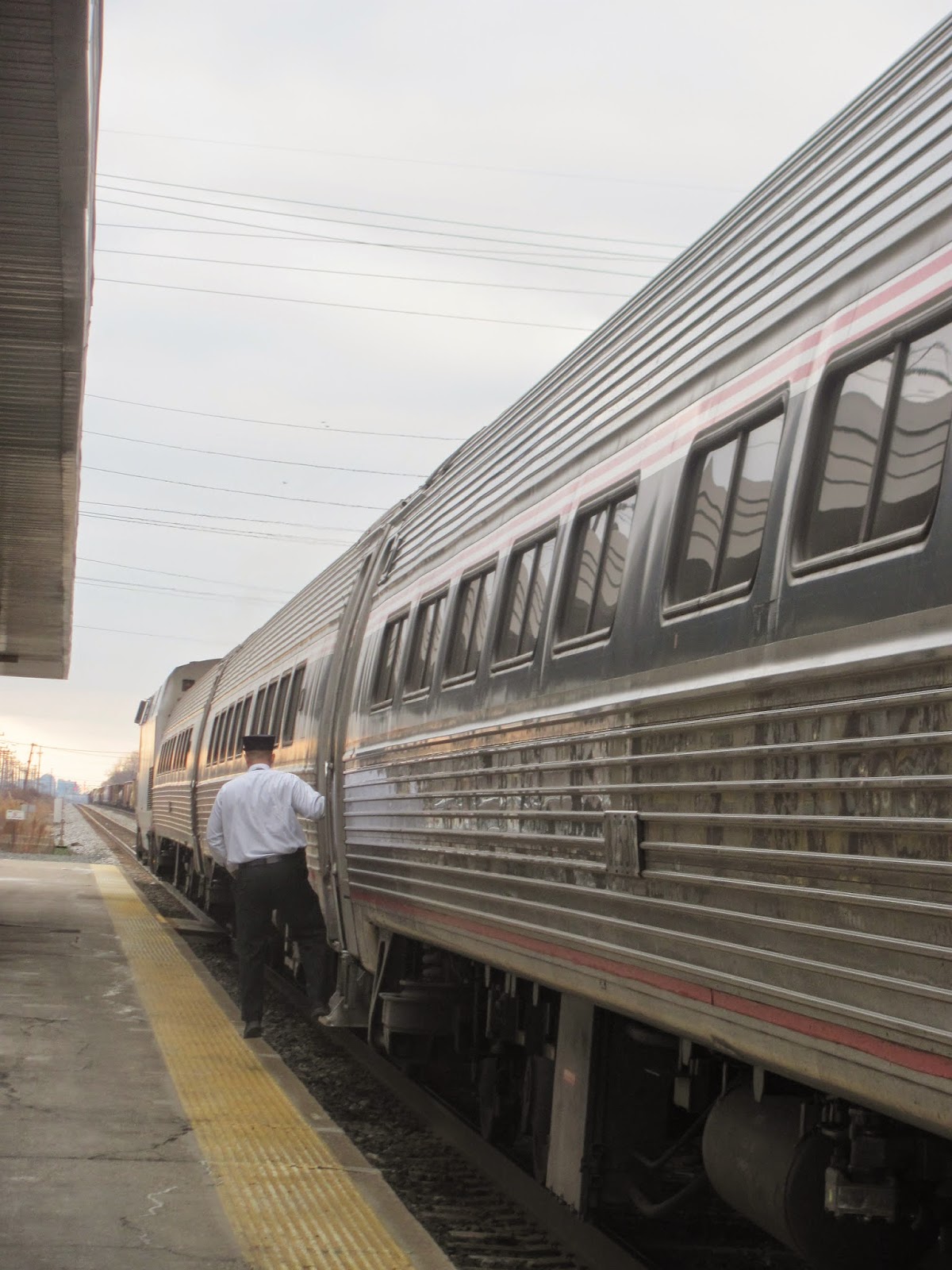