The Upside and the Downside

...of a western New York winter.  A most perfect day on the ski slopes. New snow, sunshine, blue skies, not too cold and even if it was so-called "holiday week" (the week of Washington's birthday) and the equivalent of half-term, not too crowded. The roads getting there were fine too. For once it all came together. 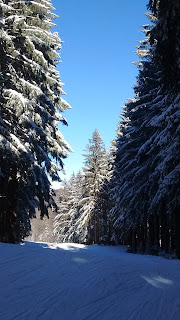 On the upper slopes you can almost feel you're in some Alpine place,  without the avalanche danger and, unfortunately, without the gluhwein/vin chaud/vino caldo - not even that alcoholic hot chocolate the un-pc French call a Lumumba. Four different cafes and no one offers it. Contravenes health and safety, I expect. 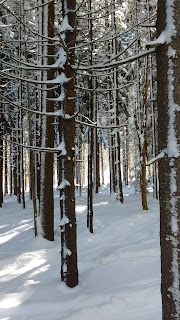 Another upside - driving through romantic old villages, in this case one called Angelica,

the trees frosted with white.

And fairytale forests along the lanes

But then in town you get this

Banks of dirty packed snow, and roads slushy from salt

But unlike in Britain, cars keep driving and people get on with their daily lives.

Well they have to - no public transport to speak of around here.

Though my neighbours talk about the weather an awful lot - even more, surprisingly, than they do in Britain. The weather and who's had what operations are the favourite western New York topics of conversation.
You can forgive them this year. It's been a strange winter. And they say it's going to rain next.
Posted by Alenka at 7:15 PM