The other day, Hubby and I found ourselves in Mentor, Ohio, a town with some gracious Victorian villas, 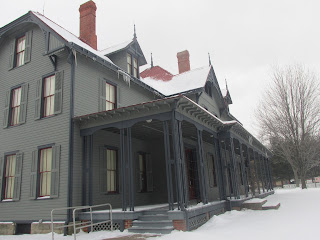 one of which had a sign saying “James A Garfield National Historic Site”,    James A Garfield being the 20th President of the United States, elected in 1880.  It was bitterly cold and snowy – we could do worse than going inside and taking the tour. 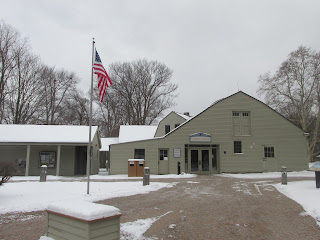 The former coach house had been turned into a visitor centre,  where you could buy Garfield mugs, books and postcards and dolls dressed as National Park rangers.
On this icy Saturday there  were only a couple of other people looking round. When you’re trying to list the American Presidents (a good sleep aid, I’ve found) James A Garfield’s name doesn’t immediately spring to mind.   His administration lasted just six months  and he’s now remembered less for living than for dying in office. He was one of  four US Presidents to be assassinated. 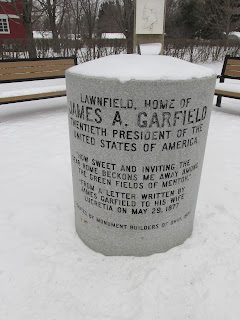 Still, as we followed our guide, dressed in Park Ranger costume complete with hat, I  found Garfield’s story surprisingly compelling.    A farmer’s son – his father died when he was a toddler - and the last President to be born, literally, in a log cabin,  he epitomised the traditional “American Dream”. 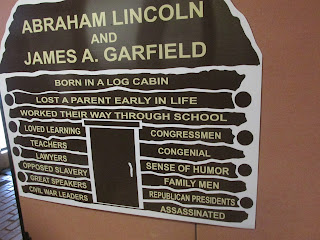 A  miraculous rescue from drowning convinced him that  God had great things in store for him. He worked his way through college – his mother had donated the last of her savings but it only paid for one term. He read avidly, was a preacher for a time and served as a Union officer in the Civil War. 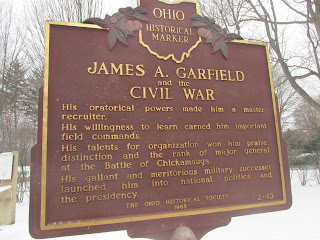 He didn’t know much about soldiering but took it up with enthusiasm and guts and ended up a Major-General. He was elected to Congress, where he championed education and the rights of former slaves. To his own surprise he found himself running for President as a compromise Republican candidate.
He was advised to say little so he would seem wise and made only one major campaign speech. He preferred to meet his public at his front porch -  the very front porch that we were now entering.  Thousands of his supporters used to flock there and he told one group of black students who serenaded him,  “I would rather be with you and defeated, than against you and victorious.”
Garfield’s descendants did us a service by handing over his house to the nation with almost all the family’s furniture still there. This room belonged to his daughter, Mollie. 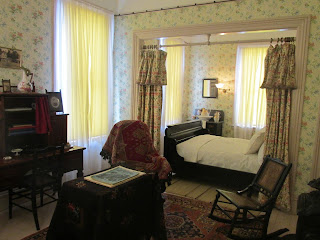 His mother also lived with the family. Mollie apparently had some choice things to say about that in her diary.
Here's a cherubic centrepiece in the dining room. A long way from a log cabin. 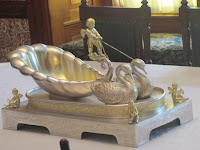 And an ornate radiator. 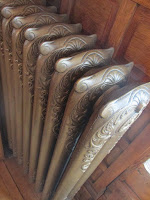 In some ways the house, converted from an old farmhouse, seemed surprisingly modern, arts-and-craftsy. 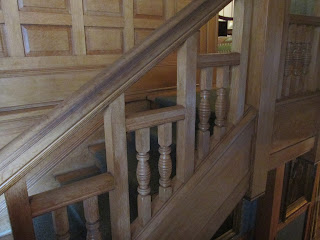 Garfield's wife Lucretia was interested in interior design. The early years of their marriage were rocky but things settled down later. She built a memorial library to honour him after his death. 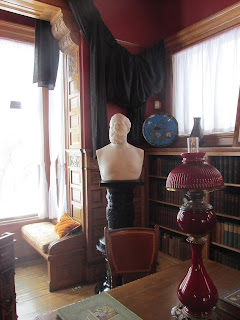 I liked the little spider motif 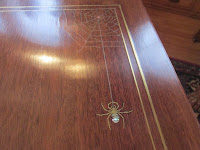 We could see Garfield's tiny desk (he used to sit sideways) 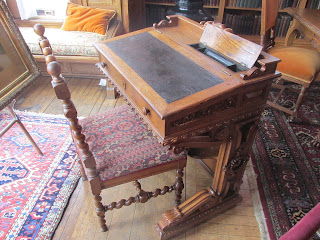 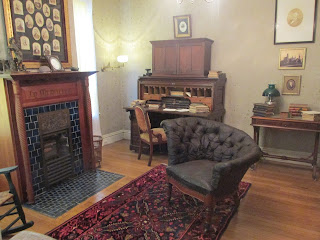 and the bed in which he made his last train journey. 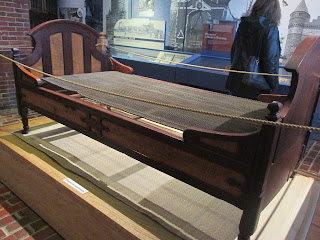 Because unfortunately, Garfield had no sooner been inaugurated and started work as President than he was shot in the back by a delusional office-seeker, Charles Guiteau.
In many ways Garfield led a very 19th century life. He sported a bushy beard, two of his seven children died in infancy, he lived in a White House infested with rats and malaria-carrying mosquitoes. 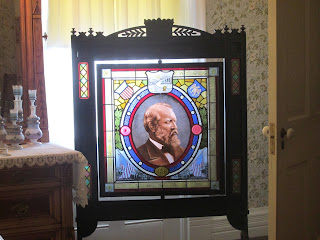 And he certainly had a very 19th century death, helped along by a doctor who considered Lister’s theories of antisepsis new-fangled nonsense and persisted in groping the bullet wound with dirty hands. 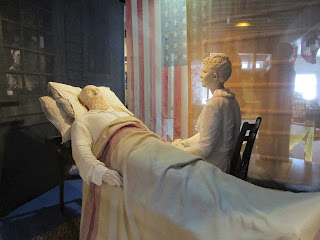 Garfield lingered for 80 days before infection finally killed him - despite the best efforts of the White House’s Catholic cook, who sprinkled his food with holy water.
But his death sparked a timeless outpouring of national grief. Queen Victoria wrote a condolence letter.. 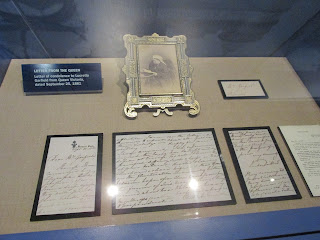 Garfield's story gave me some food for thought. He came into office when the gap between poor and super-rich was widening, when the  Republican Party was split by squabbling factions and corruption had made voters cynical about politics and politicians.  Sounds familiar? His supporters hoped Garfield would be different – a man to be trusted. He never had the chance to prove them right or wrong.   But as we came back out into the February cold, I couldn’t help wondering if all that much has changed. 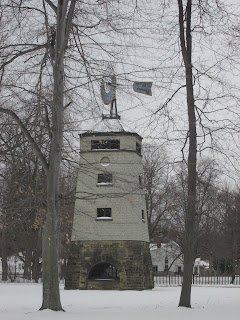