The blog has returned from a quick trip to Blighty where, I have to say, it was unfairly cold, although the daffs were out in force.
I landed in Newark, which,is one of the western hemisphere's most charmless airports. You get through Immigration, you know you have to make a connection to Buffalo and you're absolutely on your own to work out how to get to the right terminal, via a cleverly-concealed train and then through another lot of Security, where the queues are endless. I wondered what happened to the British lads in front of me who had naively imagined that 45 minutes was enough time to make their next flight.  Dream on! You need to leave at least two hours. And the Buffalo flights invariably leave from the grottiest terminal,  which is invariably in the process of some sort of renovation and invariably full of seething humanity with nowhere to sit and nothing decent to eat and the smell of something fried and unappetising hanging over everything. I thought fondly of Heathrow Terminal Two, where I'd had a civilised Full English, delightfully served in a calm atmosphere and at a proper table and even more fondly, as I eyed the dodgy-looking tuna sandwich which was the only vaguely edible thing in Newark, of my last English Banger, probaby for a long time.
But the worst thing was the heat. It was unbearably, stiflingly hot. I never thought I'd be crying out for air-conditioning. They had huge fans blowing away to little avail. It was, after all, early March and in early March, it's not supposed to be hot.
And in western New York, early March is supposed to look like this. 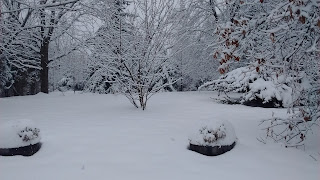 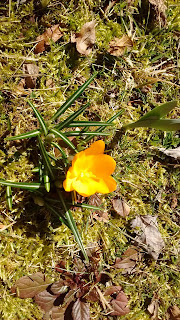 Or, for that matter, this 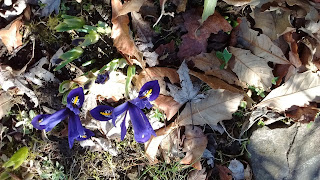 And last night we heard, from the pond over the hill,  the spring peepers, the baby frogs with their sleigh-bell-like singing, harbingers of spring - but surely much too early?
Posted by Alenka at 1:58 PM