Mentor, Ohio, Part 2: From the Fridge to the Freezer

You might have realised by now that I’m not a particular fan of American sports. I still can’t get my head around American football.  A schoolfriend once took me to a baseball game;  all I can remember was that it was the LA Dodgers and I fell asleep. Hockey is different. I can just about understand hockey because the rules are a bit like watching Man United v. Arsenal.  You have to get the ball into the net, except that it's called a puck and it's so small that none of the spectators can see it, which adds to the mystique. We're talking ice hockey of course.  Americans call the kind we used to play at school  “field hockey”. I don't know if that's a derogatory term but it sounds like it.
Hubby once took me to a Buffalo Sabres game (yes they do spell it like that) and the atmosphere was great, though we were sitting so high up in the giant arena that I could hardly see the players, let alone the puck.  And they put what you were supposed to shout on a big electronic board,  “Let’s Go, Woo-hoo” and so on.
This, incidentally is not the Buffalo Sabres' arena but the civic arena in Mentor, Ohio, quite near Garfield's house (see below).  A youth hockey tournament is in progress. We have a family interest, so we're supporting the team in white, the Ice Dragons. 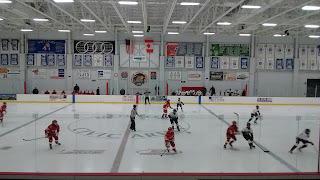 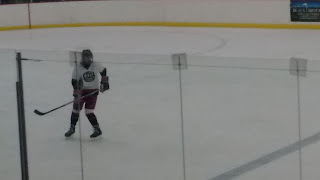 They put up a credible performance.  It's hard to clap though, wearing thick gloves. 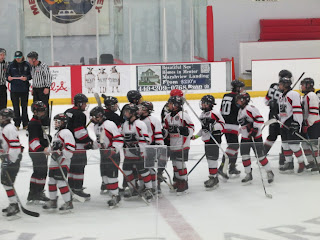 Above are the teams shaking hands after, not before, a match. Professional hockey is notoriously rough, so I suppose they're trying to get them into good habits early. It's what's called the triumph of hope over experience.
Posted by Alenka at 4:21 PM