The Other New York 7: What a Shower 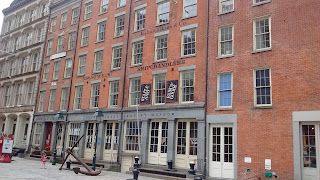 This was a ship chandlers, a name very evocative of the old days.

The pigeon made me feel quite at home. 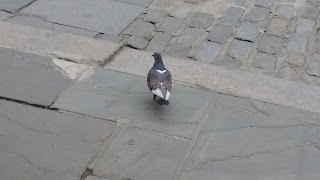 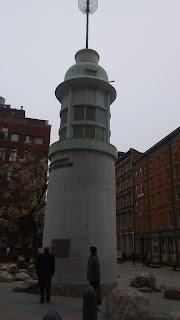 And guess what. On closer inspection, it proved to be a Titanic Memorial. The unfortunate ship, of course, never made it to New York. The survivors got there on the Carpathia, a few days late. While making a Titanic documentary for the BBC,  I once interviewed the delightful daughter of Captain Rostron of the Carpathia, who, on a freezing day, welcomed me with hot soup just as her father must have done for the rescued all those many years ago. 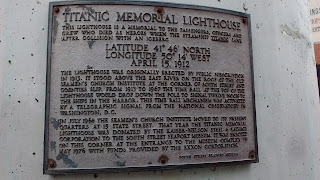 But what we had really come all this way to see was peaking tantalisingly above the chimney pots. 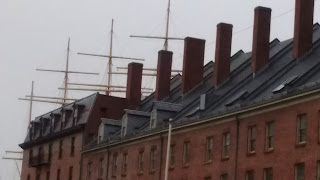 Not so much peaking as "Peking", a great old sailing ship, one of the last to carry cargo around Cape Horn. There is a fantastic video about this, narrated in his old age by an amateur crew member called Irving Johnson. Since seeing it we'd always wanted to see Peking. (Which, incidentally had a later existence in Britain as one of the Shaftesbury Home Arethusa ships and also served in the Royal Navy as HMS Pekin.  ) 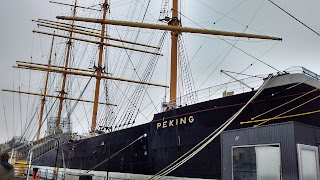 Well we reached the museum, waiting outside for it to open at the lesiurely hour of 11am. And when we got in we were told that, no, we couldn't tour the ship because it was "going to rain". Note the "going to". It was not currently raining. It did not rain for a full hour (I kept a record.) But no, the jobsworths were deaf to our pleas. "This ship", I pointed out, went round Cape Horn in ferocious storms many, many times, with all hands mostly intact and you're bothered about a bit of rain?" We offered to exit the ship at the first drop of rain. None of it helped.  They were totally unmoved, willing slaves to Health and Safety if it killed them. And they added insult to injury by cheerfully pointing out that the ship was about to be returned to Germany, its original home, so this really would have been our last chance to see it. I really nearly lost it at that point. 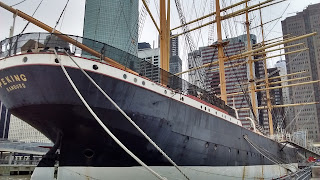 Not to mention that we had to pay five dollars admission to see one measly gallery with little in it but some photos and history we could happily have seen online.  The excuse for this was damage from Hurricane Sandy, which, as I recall, happened four years ago.
What a pathetic show. The crew of the Peking would have been bemused.
(I contrast all this with a recent visit back in Blighty to the SS Great Britain in Bristol - gorgeously restored, plenty to see, no nonsense about rain, just a sensible warning sign to be careful not to slip. I suggest the South Street Museum apparatchiks go and take a look.)
Posted by Alenka at 6:35 AM