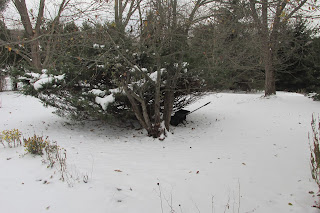 We thought the pilot was joking when we approached Niagara Falls. Temperature in the 40s, he said. Down in Cattaraugus County it was much colder than that and we drove through a blizzard. And to think a couple of days ago I was on the beach.
The flight was fine, though, No Flying Turkeys award so far for Allegiant Airlines, America's equivalent of Ryanair, or one of them. They have a direct flight from Niagara Falls to Punta Gorda, Florida and back, which means no changing planes in Atlanta, no missed connections and so on. They also train their pilots to land very smoothly - never have I had such smooth landings as with Allegiant Airlines. There is only one drawback. This is not a good airline to take if you are allergic to dogs. On this flight there was a small dog in practically every second seat. People travelling back and forth from Florida with their Pekinese and Shi Tzuhs and Lhasa Apsos and Boston terriers and numerous poodles, all in little carriers.  Sometimes a frantic yapping ensues and a harrassed stewardess rushes up,  "Sorry Ma'am, we don't allow two dogs to sit together; you'll have to move to another seat", or "Sorry Ma'am, he is not allowed to sit on the seat. He has to go under the seat". One of the dogs had a bright orange tie-dyed tail. His owner explained that it was part of his Halloween costume and they hadn't been able to wash it off.
Oh and Happy Thanksgiving to my American friends!
Posted by Alenka at 9:46 AM