It's funny what you can find on the beach, especially early in the morning. 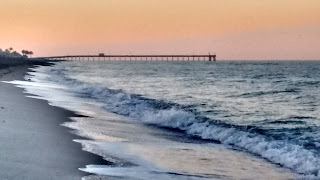 Apart from the usual suspects 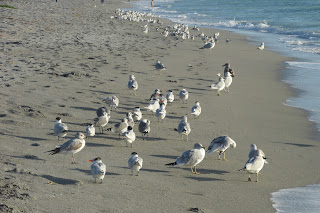 Every day, every tide, brings something different. For example I discovered where the Likely Swamp, which  runs under Harbor (sic) Drive (and fascinates me with its exotic quality and the feeling there might be alligators lurking, though I've never seen one here), 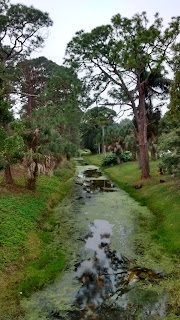 runs out to the sea. Except it doesn't quite run out to sea. There's sand in the way. 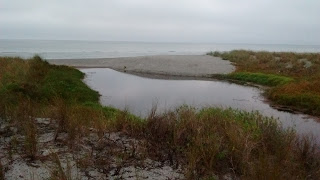 Somebody lives here. A little crab, perhaps. He's just swept out the hallway. 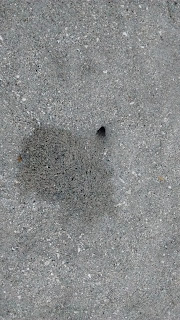 Here are the sad remains of his bigger brother 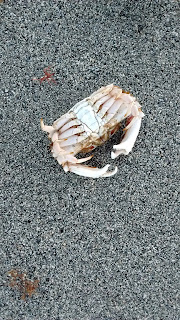 The Red Tide of toxic algae has hit us badly this trip. More often than not, the beach and its environs have sounded like a consumptive ward, with people coughing. Signs tell you, if you're affected, to find another beach. Too late, though, for this baby shark. Whose is the mysterious footprint on the left? 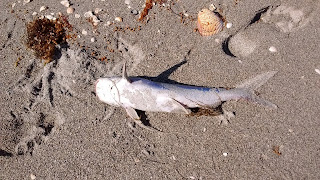 But here's something prettier - someone made a little Christmas garden among the dunes, painting the pine cones and carefully dotting out the shells. They must have searched hard. This is not a great beach for shells. 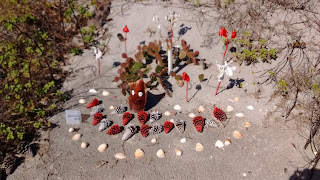 And I wonder what the story is behind this. A tyre? A rubber ring? A lifebelt from some stricken ship from long ago? 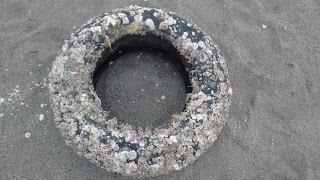 No treasures, exactly, but never a dull moment.
Posted by Alenka at 7:20 PM