Hello Columbus: All Along the Riverbank

Columbus, by all accounts, is a thriving city. They've forked out for a giant scheme to improve the river banks - the river is the Scioto - and there's a very new-looking path. Rather too new-looking but no doubt it will age gracefully. The couple of mornings I ventured on it, there was hardly anyone else there. 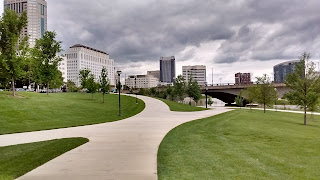 Except a few geese. But this is modern life and you're never far from a "Do Not" sign. 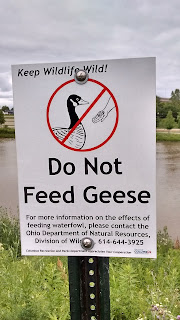 The path takes you past some impressive buildings - I believe this one is the Department of LabOR, nothing to do with Jeremy Corbyn. 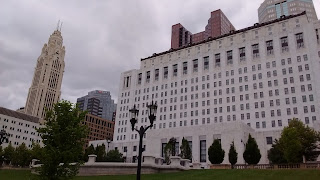 And you get to walk under a futuristic-looking bridge. 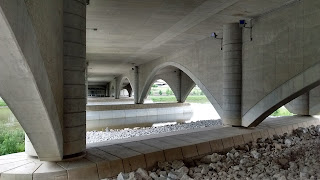 And across the river is what looks like a futuristic building underway. Lots of building going on in Columbus. It's a Thriving City. 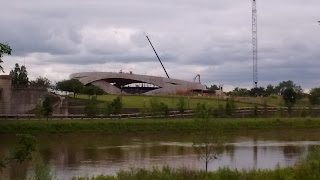 Not long before we reach another warning sign. This is presumably for cyclists - walkers can probably cope with a little of the unknown. 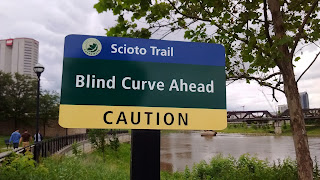 This looks like a railway weed, no known as a Jogging Trail Weed. 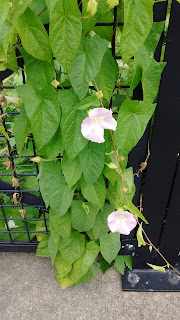 There are also plenty of commemorative plaques. 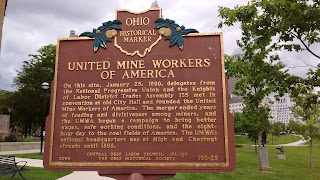 This one remembering Italian immigrants, donated by the United Italian Americans in 1992, presumably for the 500th anniversary of one of the world's most famous dates. Christopher Columbus, the very first Italian immigrant, when you think about it,  is not very politically correct these days. I hope the city won't have to change its name. 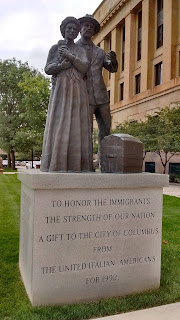 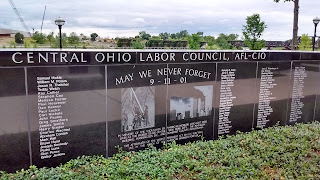 And the lion and the unicorn. 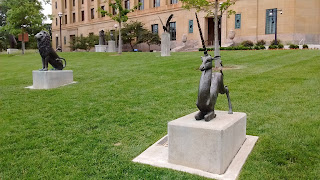 Apparently there used to be some kind of children's enchanted forest here before they redid everything. A pity it's not there any more. At the moment it all seems rather stark and clinical and very, very neat and tidy.  Perhaps it just needs time.
to be continued....
Posted by Alenka at 7:50 PM