Now one interesting thing about Columbus, state capital of Ohio,  is that it has a High Street!  Well fancy that. It's unusual for American towns. They tend to have a Main Street, which, I have gathered, is similar to the British High Street. Except most of the shops seem to have closed down sooner than their British equivalents.  Not so much in Columbus though. Columbus is obviously prospering. These chaps may look fearsome but were actually very polite. They told me they were demonstrating outside the State House (equivalent of County Hall. Sort of) in favour of the right to bear arms. 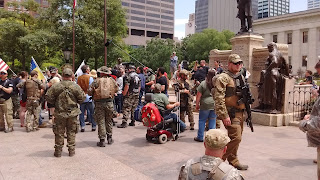 As you see, they were busy exercising their right. 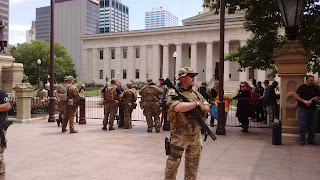 But no one seemed particularly bothered. They just wanted to take their photographs. 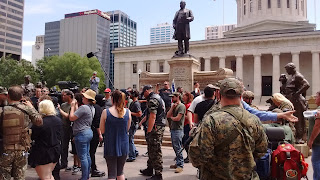 Here is another shot of the Ministry of LabOR (see below).  It states, "The Whole Fabric of Society Rests Upon LabOR".  Discuss. 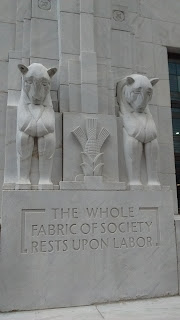 It was surrounded by some earnest ponds, inscribed with virtues like "Honesty" 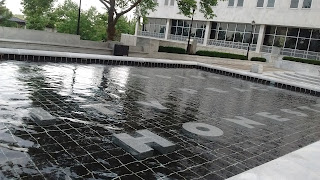 There were also some charming fish fountains, like this one.. 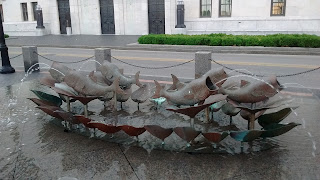 And this, nicely reflected in the early morning light of the limpid pool. 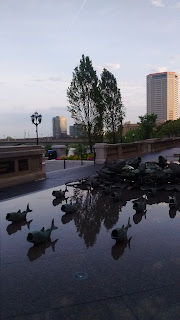 Why do everyone else's flower beds look so much better than mine? 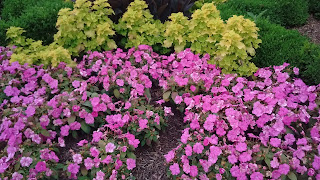 If you look closely at the bridge, you can see they were setting up rows of white tents for an Art Fair. "It's our first big event!" said the elderly gentleman who was helping get things ready in the early morning. He was very excited to tell me about it. I suppose he meant not the first ever but the first since the river banks were landscaped. 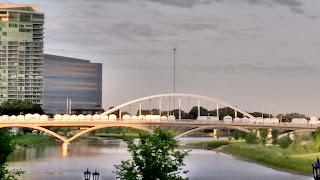 And there was more across the river too. 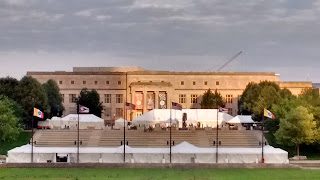 Back to the environs of the Ministry of LabOR . You'll notice that this is no ordinary park bench but a swing. The planners thought of everything. There must have been some money left over for a little whimsy. 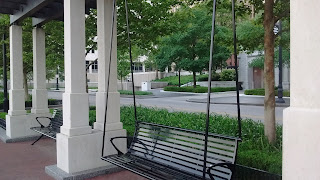 And wrought iron tables and chairs for employees to sit and eat their lunch. They evidently had to be chained up, as you can see. A sad reflection of our times that somebody could be bothered to walk off with a table and chairs and evidence that not all is harmonious on the river bank. 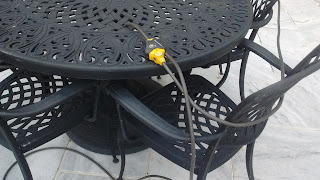 I'm not quite sure what this is for - 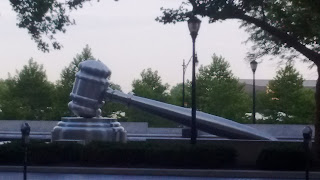 but I wouldn't like to be on the wrong end of it.
To be continued
Posted by Alenka at 9:04 PM