Whatever Happened to Sailing?

You may have observed that I've hardly mentioned sailing this summer. The weather has conspired against us. If hasn't been raining, it's been thundering or too windy, with "small craft advisories" issued. And since our Etap, Titanic ll,  is undeniably a small craft, we've reluctantly had to take notice. And you can't be too careful where thunder's concerned. One year hubby was looking out at a calm lake when a bolt of lightening came down from nowhere right in front of his nose. So we've had to resort to driving along the marina wall watching the whitecaps and the occasional big ship coming in to Buffalo. 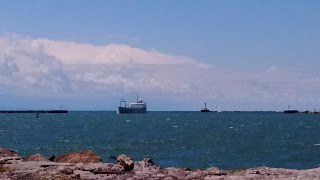 Or the small ships splashing around the harbour. This mini paddle boat is a new one on me. 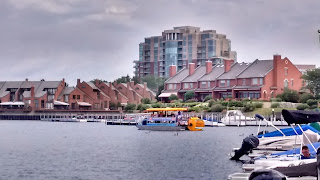 And after the mini paddle boat, a maxi canoe. Maybe they're in training for the Boat Race. The Oxford and Cambridge one I mean. But we're a long way from Putney-to-Mortlake and the Atlantic's the other way.. I think they're heading for the restaurant. It's music doesn't seem to be so loud this year. Can we hope? 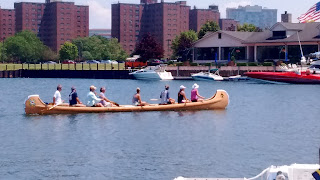 But after much frustration we did manage to set sail a couple of times. 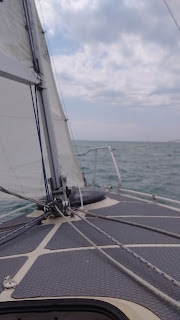 And we realised how much we'd missed it.
Posted by Alenka at 9:47 PM