On Sailing and Stalin

Buffalo marina on an autumn day and here's Titanic 2 (names have been changed) up on the trailer and ready to head down to the neighbour's barn in Cattaraugus County. There was something of a traffic jam on the retrieval ramp - with only a few days to go till the marina closed for the winter, several others had had the same idea, including the noisy restaurant, which was busy hauling away its several various floating docks.  They had to go up the ramp too. Meanwhile we were huffing and puffing and heavy lifting  and attending to all the little details that sailing boats have. It's like undressing an Elizabethan duchess. "I can't fathom" hubby panted, "Why this always takes so long." 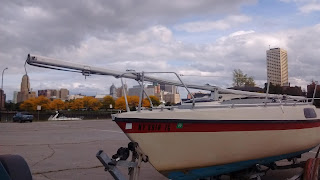 Way in the distance you can see to the left, behind the autumnal trees, Buffalo's art deco city hall (I'd say it's more like the Stalin Gothic you get in eastern Europe but it doesn't have a spiky top). It will be a long time before we see this view again.
And the other way, the pretty 19th century lighthouse - too bad the other buildings in the marina don't match, being a triumph of neo-brutalism. 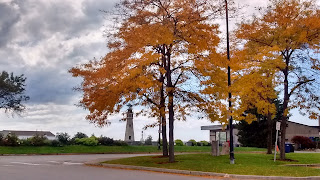 The blog will shortly be on its road trip south to Golden Beach. I already feel quite nostalgic for autumn frosts - even though, in this bizarre year for weather, we haven't had one yet.
And speaking of the above, I was trying to book a hotel room for one of this year's destinations and got into one of those "chats" on line with an employee. "Hello", he typed, "You're speaking to Stalin, how can I help you?"  After a frisson of alarm, I was very kind and resisted a comment. He must get them all the time.
Posted by Alenka at 10:10 AM