..Will be tomorrow, they say. Then the temperatures plunge some 25 degrees. It's a swizz - since we've been back it's been rain, rain and more rain.  The apples on the grass are a squelchy mess. 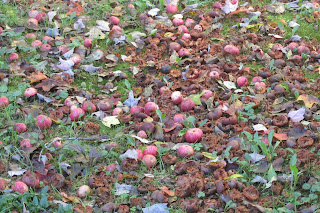 But today the sun shone and I'd planned an al fresco lunch with friends.  This can be unwise in America because of the preponderance of flying insects exuding varying degrees of menace. But this is autumn and hubby had used a flamethrower on the wasps' nest in the lawn.
On the menu were bison burgers from our neighbour, Jeff's herd.  There's nothing better -  plus British apple and blackberry crumble which is always a hit with my friends here.  I said to hubby "What's the betting someone starts mowing."  (For the full gen on the local lawnmower menace, click here.)      Well fate was certainly playing tricks with me today. Just an hour before our guests were due to show up, several trucks appeared and started doing something very noisy with the surface of the lane. Plus everywhere stank to high heaven of tar.   Of all the days to pick...Thankfully they moved along pretty quickly. Just as I'd heaved a sigh of relief, guess what happened? Yep, a mower revved up. And the last surviving wasp buzzed us, bent on revenge.  But there's nothing a good lunch and plenty of ice cold sauvignon blanc can't surmount.
The jungle, having been neglected for much of the summer, is, admittedly, unruly 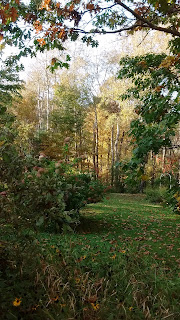 But the rose surprised us with an encore. 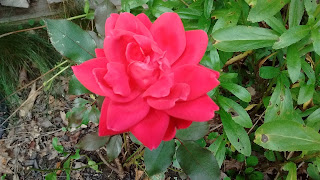 And I'd found pumpkins for the doorstep  from the same chap we get excellent sweet corn from on the way to Ellicottville. He didn't disappoint - his pumpkins were fat and perfectly round, not with one side flattened like the specimens from the supermarket. 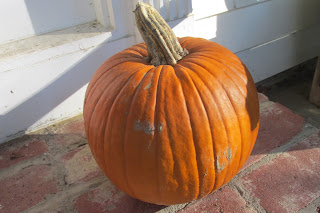 The hydrangeas looked pretty round the bird bath 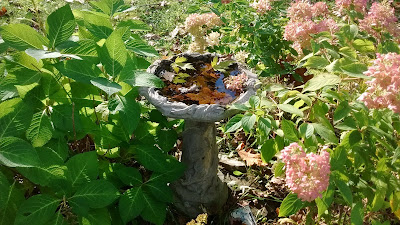 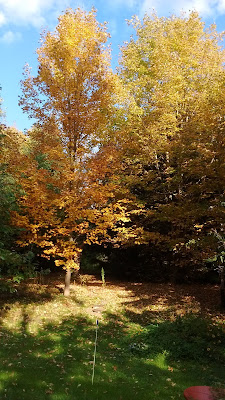 And some cheeky mushrooms were popping up. 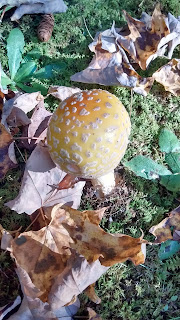 These were truly bizarre. 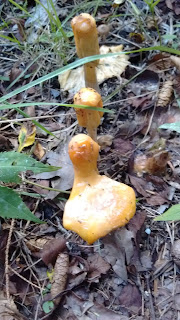 I need advice from my Mushroom Mania friend. He would probably cook up quite a few meals after foraging in our jungle but I'm not about to try it. I'll stick to bison burgers. 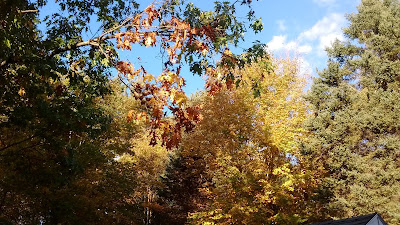