Out of the Frying Pan into....

Well hello again!  After a few weeks of travelling, the blog is back at base - for a couple of weeks at any rate, before it heads south.  The travels included a Brexit-obsessed Blighty and just when I'd had my fill of political playground argy-bargy, what happened? I arrived in the United States to more of the same. Once again the air is rent with the sounds of axes grinding, toys crashing out of pushchairs and ancient skeletons dragged screeching and rattling out of their cupboards.
I would suggest calming down and having a nice cup of tea or, as my Dad was wont to say, a few convivial drinks (though under the circumstances the latter might not be entirely appropriate.) But I fear it's gone beyond that.
As a foreigner I don't think I should enter the fray but I would gently suggest to my American friends that, had they never severed their ties with their mother country , they might not be having this particular set of troubles. I don't recall judges in Britain being selected or opposed because of their political, social and ethical views. They're mostly chosen because they're good at the law and with little public fuss. Nor do their personal lives seem to enter into it much. But then we Brits don't have a Constitution to fight over. And Supreme Court judges Stateside have a crucial role, you could say, in running the country. They, rather than the elected politicians, have made some of its most  momentous decisions.  Hence there's a lot at stake and people get understandably twitchy about getting the right person in. I'm not sure if that's exactly what George Washington and his friends intended but there, I  suppose, you are.
So on to other things. We arrived back to find the jungle still hanging in there in its last autumn gasp, 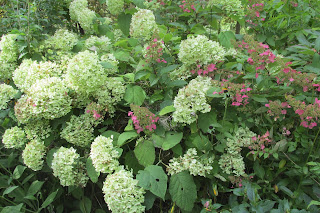 the sedum perky as ever 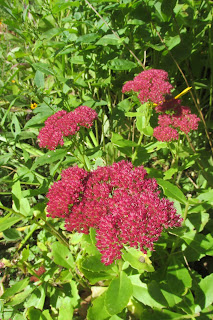 Though one of the hardy hydrangeas had mutated alarmingly 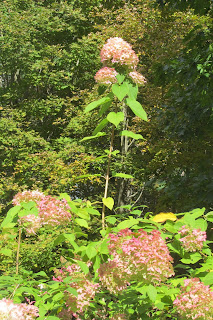 And against all odds, the sumac appeared to have been struck by lightning yet again. There's not much left of it. Time to call it a day I think. 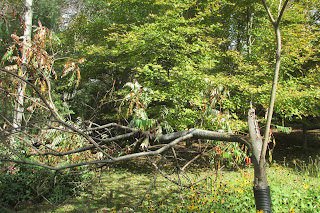 That's what I should be doing with this gardening lark. But the Home Depot (America's answer to B and Q) had a good deal today on perennial asters. And I thought I might as well buy some more bulbs. I never learn.
Posted by Alenka at 8:43 PM