In the morning, after an English (aka American) breakfast worthy of an ocean liner, we hit the road again. The Ohio river was blanked out by fog. Beyond the bushes, you'd think there was nothing there. 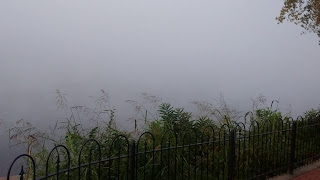 As we drove along the river - resplendent with all kinds of industrial stuff - we saw mist swirling up from the surface. "Got to take a photo!" I said.  But we had no end of trouble finding a place where we could get close to the river. We ended up driving over the bridge to West Virginia, to Parkersburg where we'd stayed three years previously. (Goodness, was it really three years?) Too late, we discovered it was a toll bridge but the friendly toll lady pointed us in the direction of some likely spots for taking photos, mentioning a hospital and a car dealers, both of which we found but not the road to the river. I remember the last time we were here we found it hard to get to the river too but this time we were more tenacious. Sister-in-law discovered a road that went upwards - if we couldn't get level with the river we could at least look down on it.  And we found Fort Boreman. And there was frost on the ground. 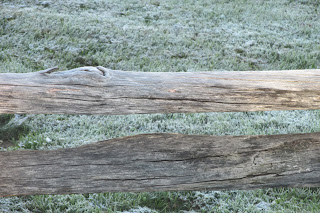 Fort Boreman, built by Union troops in the Civil War to protect the Ohio railway, had a viewpoint high up on a hill, looking out over the confluence of the Ohio and Little Kanawha rivers. 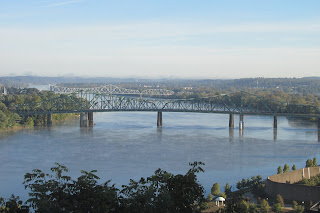 And the swirling mist was still there. 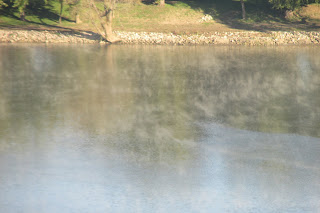 It was a chilly morning and we were the  only tourists.  Fort Boreman had recently been turned into a park. It was fun to think we might be the only people to know about it. A moment to savour.