Hubby and I went along to support our Jewish friends at the Chanukah celebration in Centennial Park on Sunday. It had been raining cats and dogs all day so things didn't look hopeful but later the skies cleared as the Rabbi MC was confident they would.
The gazebo was dressed up for the evening and there was music from a sax and electric violin (I hadn't known electric violins existed but the sound was wonderful) sported by a couple of excellent Russian musicians. 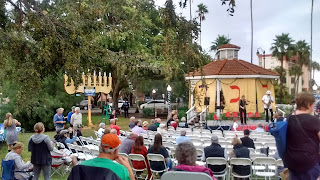 The girl on the left had a miniature blue Menorah on her head. 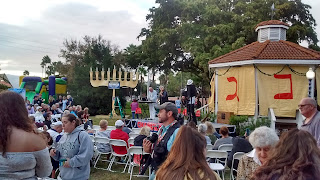 There was a children's choir and children on a bouncy castle and lots of families helping themselves to latkes and such. The mayor made a speech and later, as it grew dark, there was a commemoration of the eleven victims of the Pittsburgh synagogue attack in October, which was one reason why we'd wanted to come. Teenagers carried flaming torches to make a human menorah and made touching little speeches about each victim. A woman walked by wearing a Pittsburgh Steelers T-shirt. There's quite a big contingent of Steelers fans down here, where everyone's come from somewhere else, which is why everyone's so friendly. Though sadly there were other people wearing T-shirts marked "security" 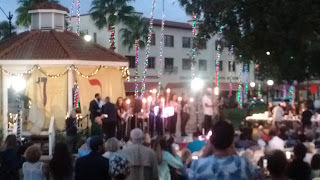 Although we're not Jewish we felt very moved. There was so much warmth and a real feeling of solidarity. A lady gave me a little candle to light. I explained that I was just a visitor, "That's OK! Welcome!" she said.
Later, a local policeman started the lighting of the big Menorah. 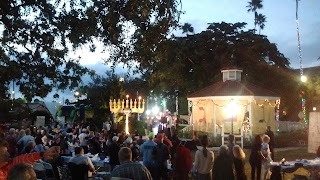 Afterwards we drove down Tampa Avenue, which so far has dodged the horrendous roadworks (but not for long). The palm trees had their Christmas lights already. Surreal Florida. 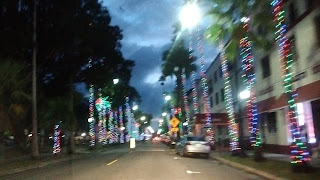