It was good to renew old acquaintance with Golden Beach, still serene on a cloudy morning. 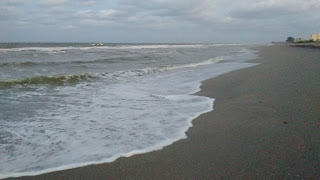 A large cigar had been washed up. Well OK, a spectacular piece of driftwood. 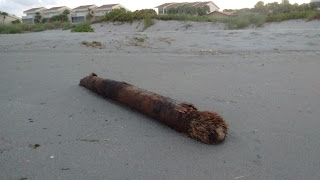 It has its own beauty in the fog. On this morning we couldn't even see the fishing pier. And best of all, not a soul around. 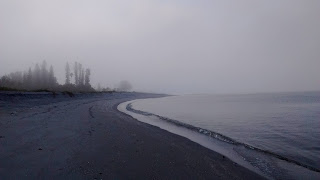 But alas, there had been trouble. While neither of the big hurricanes touched us, there was a menace lurking beyond the horizon. 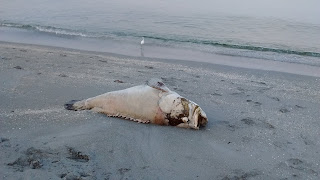 This poor, huge fish - the length of a bicycle - had apparently succumbed to it, as had countless smaller fish whose sad corpses littered the sand. The culprit was the Red Tide of noxious algae - it's always been there but this year it's particularly bad, causing coughs, sneezes and breathing problems for people and death and destruction for fish, dolphins and manatees and there is, apparently not a thing they can do about it. People are blaming it variously on too much fertiliser, global warming and politicians but in truth even so-called experts can't agree on just what causes it and just why it's been so extensive and immovable lately. It differs from day to day. If the wind's from the east, things are fine, if from the west, you can pick up the rotten fishy smell as soon as you open the door.  They say it may be dispersing into smaller sections. Lets hope so.
But it hasn't deterred people from wanting to live here.  Here's yet another monstrosity going up in what used to be a bit of wild jungle. 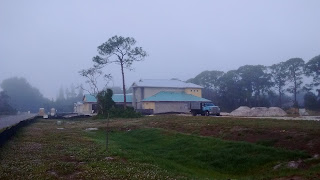 What's with the huge, high entrances, like some sinister faux-cathedral from some nightmare dystopian future?  They seem to be getting higher and higher. Everywhere there are new, big houses on the way. 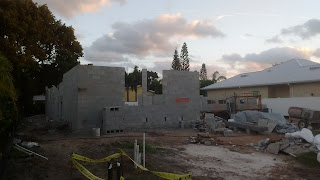 People are no longer content with the small, pastel-coloured island cottages that made this beachside community so charming.  More are being pulled down every year and replaced with something three times as big. Even retired couples with no children around want some gigantic vanity home. And all over the county, all over coastal Florida, more and more housing estates are going up, cramming more and more people in and more and more cars on the roads that are death traps already. (One local development, built hastily of wood, which is not a sensible material to be toying with in Florida,  has already had to be demolished before it was even finished because the wood got too damp. Serve them right. May the termites get the rest)
What's to be done? Well probably nothing can stop so-called progress. Sadly, one of my neighbours bumped into some people looking to buy, who said they'd read that this was top of the list of places to retire to. Which cad and bounder compiled that list? Please! Send people to Orlando, Miami, The Villages, anywhere but here!   Lies. It's all lies. This is a terrible place. Keep away!
Posted by Alenka at 7:43 PM