A Cracker of a Fair

A local friend recommended a novel about old Florida,  A Land Remembered by Patrick D. Smith, a rollicking tale about pioneers in the Sunshine State. Reading it is de rigeur for anyone spending time here - while you're idling in your swimming pool or working up an appetite on the golf course it's salutary to remember the people who first came to Florida in the days before air conditioning, battling snakes and alligators, mosquitoes and maddened bulls, bears and jungle. You could make a fortune driving cattle to the coast. If you survived. Which was a big if. The cattle drovers were called "Crackers" which became both a derogatory term for those hard-bitten southern cowboys and a badge of honour for people with real Florida ancestry.
Last weekend we went to a "Cracker Fair", a "Celebration of Old Florida". Sadly we could only get there fairly late and had to miss the whip-cracking demonstration. I'd been hoping to see horses (Patrick Smith vividly described tough little Cracker horses called Marshtackies) but they'd all gone home. There was, however, an owl. 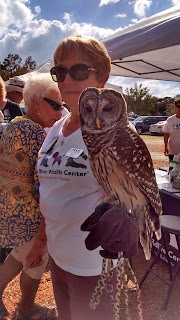 This gorgeous creature was a barred owl - not a barn owl as I at first thought. The wildlife rescue people had also brought along a turtle and a red-tailed hawk called Alistair. 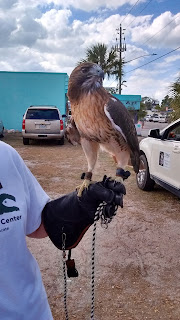 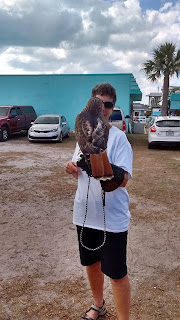 Some years ago, I made a programme for the BBC on falconry with falconer, Dan Butler and his red tailed hawk. It was good to see one again.
Otherwise there were rows of stalls, ranging  from arts and handicrafts to the Sons of Confederate Veterans in their costumes. 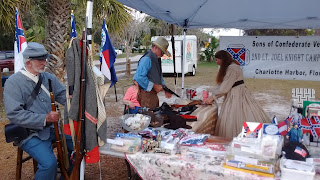 Of course Florida was part of the Confederacy though you wouldn't think it these days. Almost everyone in our neighbourhood has moved down from somewhere Up North. But no one seemed to be giving the Sons of Confederate Veterans a hard time. Good to have some live-and-let-live in these prickly times. Hubby's ancestor was an officer for the Other Side but that didn't stop them chatting away about history. In Britain we are often unaware of how complex the Civil War was. The Sons had a book on their stall about an Indian (ie a Native American) one of many who fought for the Confederacy. He was promoted to General, survived the war and lived to a ripe old age. That was a new one on me. A fascinating story.
Another stall was selling what I think were mermaid costumes. Well each to their own. 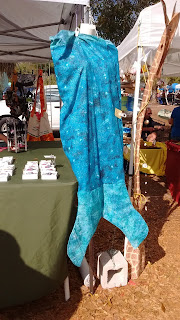 And lots of people were enjoying some country music. 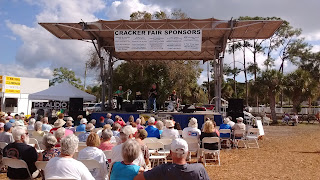 Too bad about the horses but I did come away with a very large jar of home-made pickles.
Posted by Alenka at 8:40 PM