The local ibis mob has been visiting a lot lately (see below). The other day, they took over the front garden. It had been raining and possibly there were more creepy-crawlies to be had. I hadn't noticed any fish swimming around on the lawn but I believe they also like worms and insects. 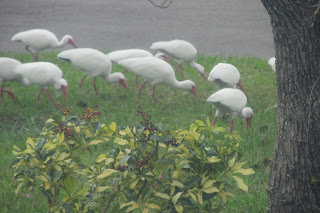 Ibises are about the size of chickens and also make homely clucking, chirping and tweeting noises. Here they are crossing the entrance to the drive. 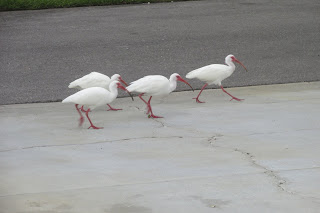 There were a bunch of black birds (but not, I think blackbirds) with them too - evidently after the same goodies. In Europe or up north there would be flocks of starlings. This is Florida of course and everything's bigger.
Elsewhere, on Golden Beach, it was early morning and someone had found breakfast. 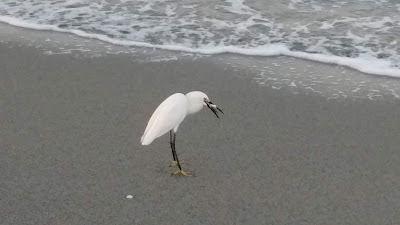 The egrets prefer to go it alone. Sometimes it pays to avoid the crowds.
Posted by Alenka at 12:26 PM