Off to the Pub

My American hubby surprised me the other day. "We are," he announced, "going out for lunch and I'm not telling you where."
We drove around in circles for a bit and then, there it was: 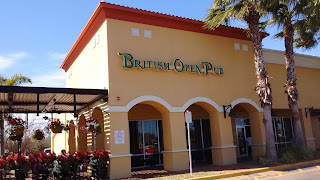 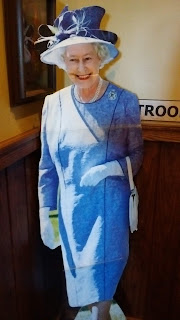 We studied the menu and I got all excited, "Bangers and mash!"
"Yes", said hubby, "that's why I thought we should come here."  I'm known for lamenting the lack of  proper British bangers  this side of the pond. When the waitress came, I asked her if they were really bangers,
"I think so, yes."
"With the skins on?"
She looked a trifle shocked, "Er no, they don't have skins."
So, sadly I decided to pass on the bangers and instead chose Scotch eggs and steak-and-ale pie. The Scotch eggs were pretty authentic - at least they were hard-boiled, unlike the trendy runny ones with the ultra-thin crust we got in New York City. The pie was near enough authentic, though a little watery and the meat wasn't the leanest but it was all made up for by some genuine Newcastle Brown Ale, which I hadn't tasted since university days.  Next time, I should try their fish and chips. Unfortunately the pub had a golf theme rather than a football (ours) one but never mind, it was great fun. There was a model train doing the rounds up above. 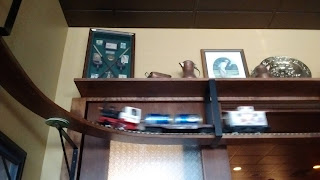 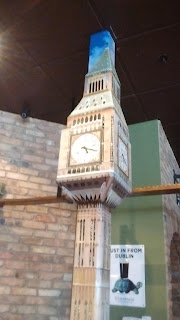 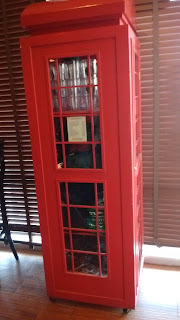 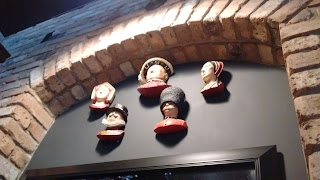 I had to push past some customers to get to it,
"Excuse me,I 'd just like to get a picture of Henry the Eighth."
They looked completely blank. "Henry who?"  I am in a foreign country after all.
Posted by Alenka at 3:26 PM