Speak to any of my neighbours who live here year-round and you'll hear a lament about the perils of "The Season". No, we're not talking Royal Ascot and Henley Regatta but the months of January, February and March, peak times for bad weather Up North, when, it seems, le tout eastern half of the USA descends on Florida. January was bad enough; it was but the prelude.
Built as it is on little more than sand and swamp, I imagine the state groaning under the incomers' weight, the encroaching armies of RVs, caravans, pickup trucks,  cars, plus the odd kayak... 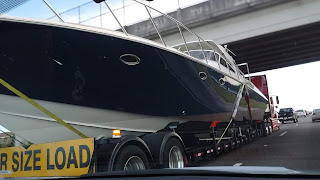 ...thundering down Interstate 75, past Tampa, St Petersburg, Sarasota and on to swanky Naples, (plus places in between like Fort Myers, Port Charlotte - and Venice)  some day disappearing into the one huge sinkhole mentioned below. I suspect some of my year-round neighbours hope they would. Alternatively, they'd like to pull up the drawbridge. 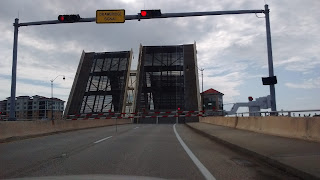 The laments include the impossibility of getting theatre tickets or a restaurant table, or room for your yoga mat, or indeed, if you've been lucky with those, a parking space. This has been made much worse by the roadworks still groaning their way through downtown.  The addition of severe iron railings to stop pedestrians wandering aimlessly across the road like the stragglers from a zombie herd has miffed a few people but come as a huge relief to others.
The influx spawns wild behaviour. Drivers swerve across four lanes, jumping lights, diving in front of you, the culprits a fatal cocktail of disoriented visitors, exasperated locals and people of a certain age who really shouldn't be driving at all. My neighbour, trying to do a legitimate left turn,  was confronted head on by a giant SUV  transfixed to the spot like a deer in her headlights, totally at a loss for which way to move. Elsewhere, hubby and I were nearly done for by a driver cutting across the road in front of us. We saw him teetering at the edge,
"Surely", said hubby, "He's not going to go is he? No, surely not...."
We were right upon him when he accelerated.
"Good Lord he IS going!"  With a screech of trusty Volvo brakes, hubby managed to save our necks.This time. The road to Sarasota is an everyday battlefield of flashing lights, sirens and general carnage.
The seasonal visitors, locals complain,  persist in believing that they're exempt from all rules, not just those of the road. They walk their dogs on the beach and into the supermarket. They come into the library and happily help themselves to books that someone else has reserved - and walk out with them before anyone can stop them.
Yes, this just happened to me. And I'm hopping mad.
We could solve the problem by retreating up north. But it's forty below there and we won't.
Posted by Alenka at 5:20 PM