Today something momentous happened. Our Florida county decided to open its beaches again. This is not, however, without its complications. They have opened the beaches only for worthy activities like walking, running and - what was the other one? Oh yes, swimming. And surfing. Though this is hardly California. So you can go on the beach provided you a) Don't come by car (the car parks are still closed but I suspect the neighbouring streets are going to get a mite clogged up), b) Don't sit or lie down or, presumably, stand still  and c) Don't even think of bringing a beach chair, a picnic or, heaven forbid, a towel. I wish them luck with policing that. 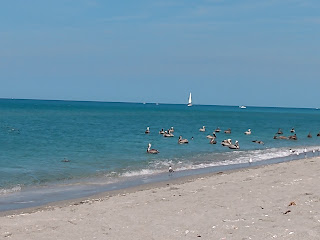 Meanwhile the local citizenry here on the island, understandably because of its average age, is being largely very responsible about social distancing. When we walk we give each other wide berths and try to disguise cautious suspicion behind big smiles and "Hello how ya doing?"  At the supermarket they've set up a one-way system around the aisles and told everyone to stay six feet apart. The staff carry on as if nothing's the matter, cheerful and welcoming behind plastic shields at the checkout. They remind me just a little of flight attendants trying to pretend there's no cause for alarm.  It's still a bit of a stressful experience. The other day I strapped on my mask (a really pretty designer one with flowers sewn by my clever neighbour) and sallied forth. First I went the wrong way down a one way street and had to go into surreptitious reverse. Then traffic came to a halt as one customer of  a  certain age pondered which brand of salad dressing to get, while another stared at the empty loo roll shelves as if trying to cook up a miracle. In the end I made the decision to overtake and inadvertently stepped backwards into the woman behind me who was tailgating, "Ewwww. don't do that!" she squealed. Well you needn't have got that close I thought uncharitably. Then in the next aisle I gave plenty of room to a maskless man. He glared at me, "It's not leprosy you know!" You can't win.
"Actually", hubby said when I got home, "It's worse than leprosy. These days you can cure leprosy."
"He didn't look as if he'd be receptive to a biology lesson", I said and wearily carried on disinfecting the orange juice cartons. Such is the new normal.
Posted by Alenka at 4:06 PM