The Emptiness of Harbor Drive

Normally on a Saturday morning Harbor (sic) Drive would be a teeny bit busier than this. People going to the golf club, the dog beach, to the human beaches, the fishing pier, the nature reserve. Not now. 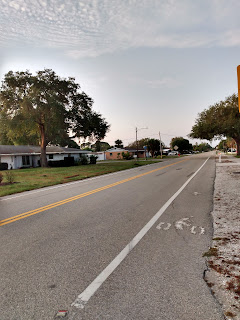 Instead walkers and cyclists have taken over. It's not always a harmonious combination. Cyclists here  - I mean the lycra-and-helmet sort, not those pottering around - don't seem to use bells to warn you they're coming. Sometimes they come extremely fast, working off their frustrations, no doubt. A swift, silent menace. Runners are almost as bad. This isn't usually a place for runners, so I don't know where they've come from, especially the younger ones. Some people still seem to be arriving here on holiday. My neighbours are not pleased about that.An extremely skinny girl blasted straight through our walking group (yes we do keep six feet apart) without so much as an excuse me. And when a lone car appears, we look at it as though it's come from an alien planet, "What are you doing here?" How times have changed.
The beach access has lost its cheerful flyers for our monthly socials and substituted stern decrees. 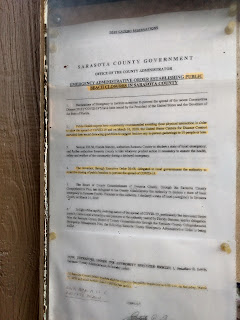 Though someone isn't bothered.. 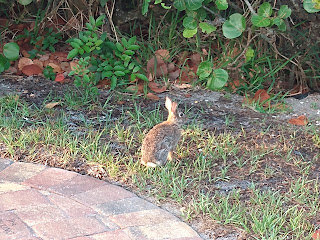 Also doing all right is the monstrosity, which seems to gain another storey every time I pass it. 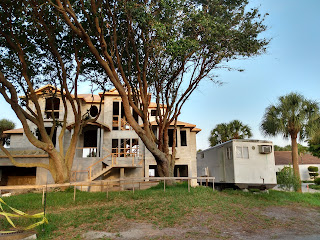 All the empty windows make it look even more sinister.  Alas, modesty and understatement isn't much in vogue here any more. if you can build bigger, bigger, bigger then why not do it?
It was the small houses that made this neighbourhood so charming. A hold-out against ostentatious, overbuilt coastal Florida. Yes OK, new building regulations mean houses on the beach have to be raised up to allow for hurricanes and flood surges. But you can still exercise a little self-restraint.   Alas, further up and down the coast there are more and more of these trophy houses going up but this is the most egregious example in our community. Neighbouring streets are still relatively unscathed but for how long? 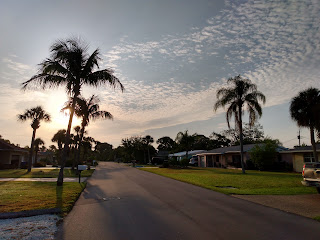