I needed a morale booster today - as we all do. For me few things hit the spot better than proper British bangers for lunch. Slightly burnt, slightly crispy, sizzling and popping in a pan. This is something I went without on this side of the pond for so many years. I tried every food shop, supermarket, website I could find but there was nothing even approximating to the true banger. I used to have several for breakfast at Heathrow before flying back as it would need to keep me going for  long, long time. Once on one of our road trips sister-in-law and I found a tiny cafe. It had no menu, just the owner who said, "What would you like and I'll see what I can do".
"What I would like is British bangers", I said without much hope. And he did produce something which for a long time held the prize as the nearest to a banger I could find in America. The taste was good but it did not have a skin. So therefore not a banger. I thought I was destined for a life of longing until something extraordinary happened.
Hubby and I went to the local German butchers' looking for real frankfurters - I'll always the remembered the frankfurters I ate as a starving student at the railway station in Salzburg - long thin and yellow with a dollop of mustard and a proper kaiser roll - with a great deal of affection, though of course not the deep enduring love I have for bangers. After we'd found the frankfurters I wandered around the shop and ended up at the fresh sausage counter. I did a double take. There, miraculously, unbelievably, among the Italian, Spanish, German stuff was a sign saying "British Bangers". I shrieked, I nearly collapsed. When I'd composed myself I gasped, "Real British bangers?"
"Of course", said the man, "we get lots of people in here with your accent". 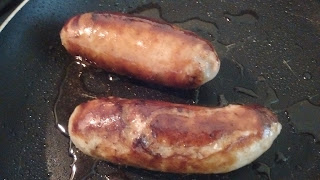 So we stocked up the freezer with the bangers, which were truly authentic. So now, when desperate times call for desperate measures I get a couple out and indulge. And the ultimate irony, which an English football fan would appreciate, is that they came from a German shop!
Posted by Alenka at 4:34 PM