The local avian population seems utterly undaunted by viruses and lockdowns. These ibises were finding something interesting in the back garden - insects or grubs maybe. 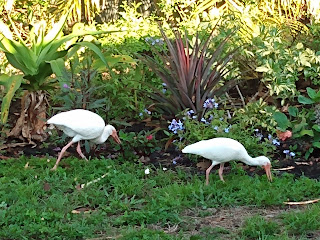 I wonder where their friends were. Perhaps these two had gone awol and weren't telling anybody. "Don't let on we've found the only place without the posh lawn." They haven't been the only visitors. There have been plenty of customers at the bird bath. They all have different tactics. The doves just perch on the side and take an occasional dainty sip. The other day I watched a blue jay fly down from the orchid tree and dive straight in, spend some time splashing the water all over the place, fly back to the tree and repeat the process at least six times while screeching at the top of his voice, "Look at me!" . (It reminded me of the bluejays up north before we got the jay proof bird feeder. They would shovel all the seed off the feeder and onto the ground with their beaks for their accomplices to gobble up.)  And once there was a small black bird who just sat in the bird bath, wings whirring like clockwork. The mocking birds, being mocking birds, do a little of everything.
There's a hawk's nest round one corner (take my word for it).

and a screech owl's round another. A red shouldered hawk likes to fly low and mean across the back garden, keeping a beady eye on the bird bath
But funniest of all are the woodpeckers. The streets resound with their rat-at-tatting which never seems to be on wood but on metal. Or some stuff they put on new houses. Since the new house was built down the road, woodpecker holes have appeared all over the front. They've tried patching them up, bird scarers on the roof, a different kind of trim. Nothing has worked. We see the woodpecker brazenly working away in broad daylight. (Possibly a downy woodpecker like this one.)

Yesterday we strolled past the house and they had workmen in, patching again. This morning there were two new holes.
Another friend, wanting to deter woodpeckers from building a nest above her balcony, with the potential aerial hazards that entailed, braved the hardware store to buy two large fake owls and spent all day rigging them up. The woodpeckers just laughed.
Posted by Alenka at 4:20 PM