Update on the Jungle

Dateline: Cattaraugus County, western New York state
As you should know by now, my gardening skills amount to the triumph of hope over experience but I said to myself when we got back here that, if the jungle didn't look good this summer, with, let's face it, nothing much else to do with one's life, then it never would. Of course there were several obstacles in the way:  flowerbeds originally planted willy nilly around tree stums (roots everywhere); a soil full of rocks (Florida soil is nothing but dust but at least you can dig) ; the charms of the local wildlife, deer, woodchucks, rabbits chipmunks, slugs, Japanese beetles and anything else you can think of; the charms of the local weather, storms, rain, drought (not to mention winter freeze-thaw). But I will be positive and mention some of the minor triumphs.
1) The deer did not eat the tall phlox this year. 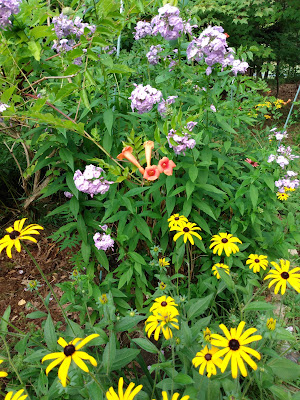 In past summers I've caught them literally with their heads buried in it, munching away. Perhaps the Irish Spring soap really did work, even if it made the garden smell like the inside of a minicab.
2) The apricot-coloured lily I always think has been smothered still manages to fight back against the opposition. It seems to enjoy the plant equivalent of city life. 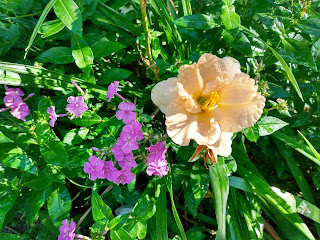 3) The deer didn't eat any of the other phlox either. Perhaps, having gobbled up every single one last year they got memorable indigestion. 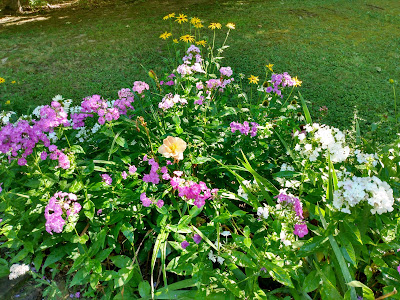 4) The slugs missed the one red coneflower. 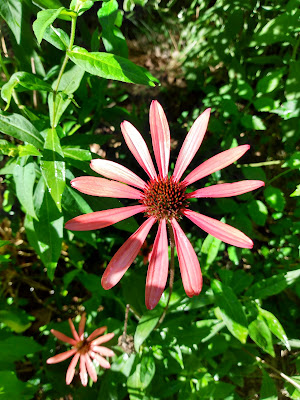 5) The eager lad at the nursery sold me some good rose fertiliser. It seems to have worked. The rose looks almost as good as it did when it was planted. 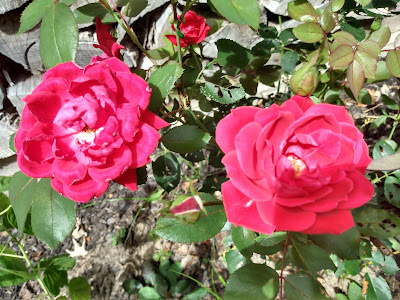 6) I managed to keep the Japanese beetles away from the hibiscus. 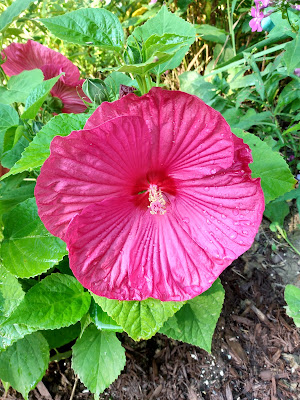 It's a sign of how desperate people are around here that slug pellets are as impossible to find in the shops as loo paper was in March. (Now the supermarket is trying to unload tons of dodgy-looking weird unknown brand loo paper which it must have got in a job lot of so maybe there'll be a glut of slug pellets soon). Same with Japanese beetle traps. But as luck would have it, I found an old, unopened one in the shed. It is currently writhing with inmates (don't tell the animal protection people)  but I sometimes wonder whether it isn't attracting even more.
6) The chipmunks left us with two tomatoes. (After I'd wrapped them all up in netting so it's impossible to pick them).
Well there have been failures too but let's not dwell on them now. Onwards and upwards!
Posted by Alenka at 10:19 AM