My neighbour shuddered, "We'd had a lot of rain. I opened the garage door and there outside was a walking catfish! Yeugh! It was horrible. And it was.." she paused for effect, "Still alive!"

"A what?"  I gulped, "But we're nowhere near water!" Nearish to the beach perhaps but so far as I know, catfish don't like seawater. I took in the horror story and googled walking catfish. No, it wasn't April Fool's Day. They do exist. 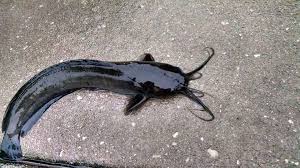 (Alas this is not my photo.) And they walk, propelling themselves along on their fins but on dry land. Or damp land, usually after it's been pouring with rain. We don't have streams in our street but we do have drainage ditches and they just love those. In all the time we'd been coming here to Florida, I had never seen one. Well just like the Number 9 Bus you don't spot one for ages and then they all come together. A few days ago my neighbour messaged me, "I think you should know that there's a walking catfish in your front garden. Not very big. About 8 inches." Correction, being American,  she actually said, "front yard." I didn't see the message for a couple of hours,  which with hindsight was a good thing. When I finally plucked up the courage to go and investigate, the creature was no longer in our front garden but in the road and also, sadly, had gone to its reward, having evidently been flattened by several cars - no mean feat on our quiet dead-end street.  It looked like the one in the picture only less shiny.  Like a bit of old tyre, actually. I messaged my neighbour thinking to point out it was slightly on her side of the street but then relented in the interests of public spirit and said that, unless she wanted it for supper, I would dispose of it. "Thank you but we have other dinner plans", she replied.

It appears that the catfish are of Asian origin and therefore considered an invasive species. (Please do not take this the wrong way.) If alive, you're not supposed to transfer them elsewhere, though I believe some people put them in a bucket and take them to the nearest pond. Our nearest pond has several alligators so I'm not sure if that would be helpful. My Indonesian friend assured me they see walking catfish all the time over there and they are delicious to eat. However she added ominously, "My mother would never cook them".