Get Me One of Those!

I sense yard sign creep - or front garden sign creep to us English speakers. The things are getting more and more numerous. For one thing, a lot of election signs are still up - notably and defiantly the Trump ones. One nearby house has changed its display to a forest of large, handwritten placards accusing a certain politician of stealing the election, with a photo of said politician with a large caption proclaiming, "Cheat!" It is not a good advertisement for democracy, though, since the signs haven't been vandalised yet, not a bad one for free speech.

Having said that, I don't mind the election signs that much, especially as - OK, in normal times - they disappear once the excitement is over. Likewise the estate agents' signs and the ads for builders and pest control. They have to earn a living. No, what I have decidedly mixed feelings about are the rash of sanctimonious virtue signalling-type slogans that seem to have multiplied everywhere. They say things like "Hate Has No Home Here", or "Integrity", or "Honesty" or "Tolerance" and such like. Not that I disagree with the sentiments in themselves but methinks they protest too much. And, since the slogans have proliferated over the past four years, I suspect they're not politically neutral. (Any more, dare I say,  than the word "Peace",  when used by the old Soviet Union and its stooges,  was politically neutral). A popular sign lists several maxims, one above the other, in different colours and fonts, on the lines of "everyone welcome here." I would dearly like to call their bluff. Turn up on the doorstep with a suitcase and say, "Gosh, thanks! Your house is much bigger than ours and a bit nearer the beach, so I think I'll move in."  I could be really naughty and dress up in a red baseball cap and see what their reaction is then. But as I frequently stress, the blog does not take sides in American politics.

Still, I was very heartened when a friend sent me this: 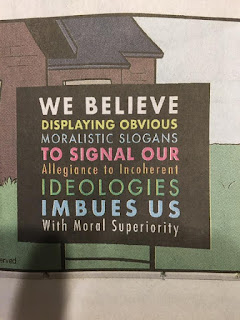 Clearly I am not alone. Ooh, please, can I have one?