Let's Have a Fun Florida Christmas

Let's count our blessings. The lady at the checkout at Publix supermarket said "Merry Christmas" not "Happy Holidays".  And unlike Easter, we'll actually be able to get to church, although we had to make reservations way ahead of time, have to get to the Cathedral half an hour before and stand in line, masked up,  to be checked off, sit where we're told to sit and so on. But it's so much better than doing it virtually.

Sadly no big family Christmas, though there'll be enough zoom sessions with various sets of relations to make it seem almost like a string of parties.

We actually got our tree in time this year so didn't have to make do with a straggly one. 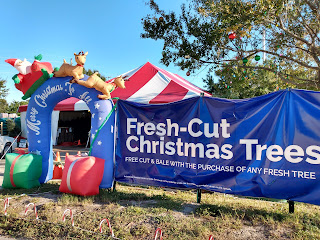 Here it is, being strapped on top of the Volvo. What Volvos were made for of course, though they wouldn't expect 80 degrees and palm trees. 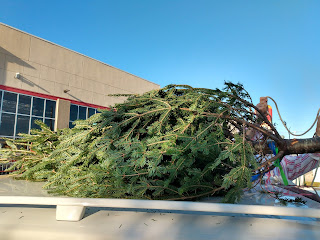 Having said that, the local paper is threatening "polar chill weather" (60 degrees or so, going down to, horror of horrors, 38 overnight) for Christmas Day, so we probably won't be having a picnic on the beach but we might manage a walk. That's after roast beef and Yorkshire pudding (turkeys are so last month) and wonder of wonders the German deli not only stocks  British bangers  but also goose fat - roast potatoes! Hurray! But sadly no chipolatas.
And of course, here, Christmas has its own Florida touches. Though where Santa on an elephant comes into it I'm not sure. 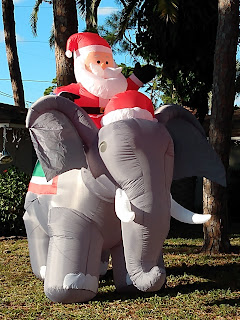 Someone must have sold the street a job lot. A couple of houses down... 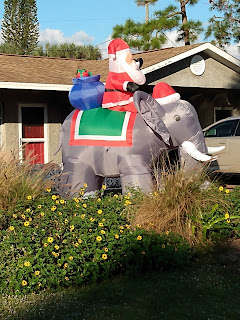 There was another one!

Around the corner, he'd arrived by helicopter. 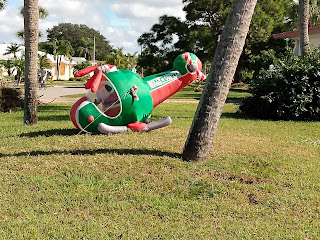 But a bigger fad this year seems to be Santa flamingos. 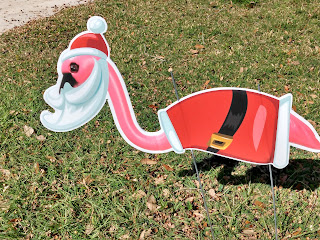 They are everywhere, including the city arboretum. 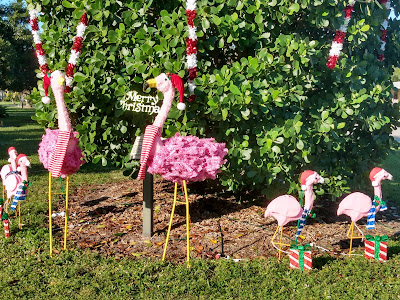 And by gosh, they're saying Merry Christmas! That's Happy Christmas of course, to my British friends. Have a good one!