It was Wednesday afternoon. I was watching the football, Liverpool v Spurs. Harry Kane about to step up for a free kick when this happened: 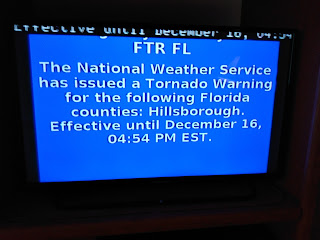 The television screen went blue, screeched and buzzed. A robotic voice warned of imminent danger of death from an "extremely dangerous" tornado and barked in apocalyptic tones, "Take Cover!" I was about to make for the coats cupboard which is about the only part of our house that doesn't have windows, when I realised the warning was for a county about an hour to the north of us. The tornado did indeed do some serious damage, upending telegraph poles, smashing buildings and flipping a pickup truck. Thankfully no one was hurt. The warning was in time. But it made me think. This sort of thing doesn't happen much in Blighty, nor indeed in rural western New York. Florida may be tamed and manicured but sometimes you get the feeling you're teetering on the edge.