Happy New Year from the Garden

New Year's Eve has sort of crept up on us - with no socialising to speak of,  I almost hadn't realised we were there - just time to stick a bottle of bubbly in the fridge so I can sip it in solidarity with friends far away. No one around here has had time to do much else in the past few days than sit grimly 24/7  at their computer screens waiting for possibly mythical vaccination appointments to free up. Florida, in its wisdom, sprang the news on us that, unlike most other states, it had some vaccines available for us of a certain age group. One friend was inordinately lucky to grab an early appointment before too many people heard about it. They are using a system normally set up for booking tickets to pop concerts and like pop concerts, the vaccination events (sic) have so far sold out in thirty seconds.  We will probably still be sitting pathetically glued to our screens this time next year.  But let's forget about that for a bit and celebrate a little horticultural lookback over the past few weeks. (I confess the garden's been a bit neglected of late - well it has been chilly, though not up to western New York standards.)

Florida is different. There are weird and wonderful things in the garden I'm only just beginning to get to know. Witness this collection of bizarre fruits. Top left a balsam pear - normally attached to a ratty-looking but tenacious vine that inches its way everywhere it's not meant to be. Followed by a ripe balsam pear with lurid red seeds, like something out of a sci fi film. And to the right, two calamondins, far too sour to eat raw but they smell delicious and if you stew them with some sugar for a while make powerfully-flavoured preserves. 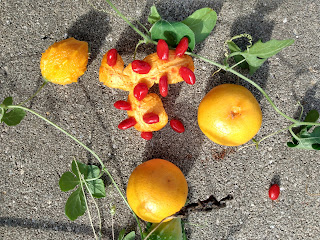 Out of the blue, a monarch caterpillar perched on Florida's version of milkweed. He disappeared after a couple of days. I like to think I saw him fluttering past. 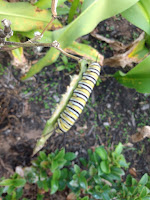 The new blue sky vine threw out one gorgeous flower - in December. 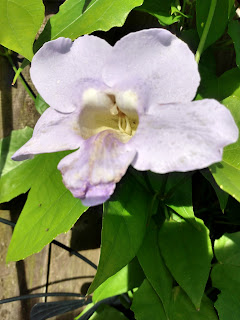 (It actually has a few more now and is going great guns.) And one of the team of giant lilies my friend kindly donated a couple of years ago suddenly brought forth. 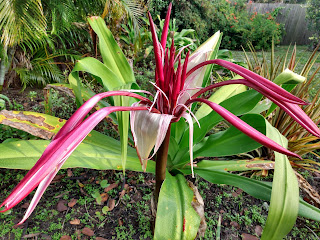 Sadly the flower had a brief life. Too heavy for its stem, I found it lying forlornly on the ground. Some kind of support is in order should its companions follow suit. It did survive for a bit in a vase. 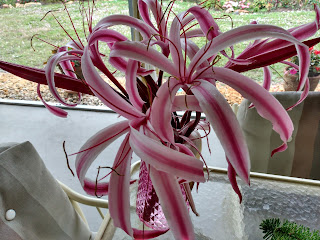 Though after a while the strong, strange, slightly-off scent drove us to ban it from the house.

Less spectacular but perhaps even more of a delight was this little thing. 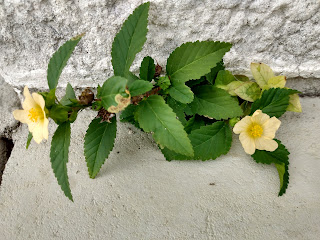 That had somehow grown out of concrete but still looked pretty chipper. That's the spirit! Let's hang on to it for a Happy New Year.