A funny thing happened the other day. You know those absurdities you get confronted with when you read a paper online? In amongst the real news, what there is of it, you get ads for all kinds of things like cures for constipation and nail fungus (what is it with nail fungus? It crops up everywhere.) Plus lurid doctored photos of celebrities with captions on the line of "You'll be amazed to see what she looks like now!" or alleged holiday snaps with, "This woman was taking a photo when this happened..." Of course they want you to click to feed your insatiable curiosity about what "this" was and then of course they've got you. I don't usually look very hard at the photos but this one caught my eye. The caption was "The most successful lawyers in Nokomis" - Nokomis being a town just to the north of us, here on the Florida Gulf Coast. 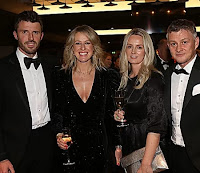 What a miracle. We all suspect we have doppelgangers. Well here were dead ringers for the Manchester United manager Ole Gunnar Solskjaer (right) and his assistant Michael Carrick. Well, on closer inspection, the photo  actually was of Carrick and OGS, with their wives Lisa and Silje. So far as I know, none of them is a lawyer and I doubt any of them frequents Nokomis, Florida. The admen must have just dredged the internet to find a suitable photo. Do they know they've been rumbled?  Don't they know even Florida has Man United fans? The Glazers come from up the road in Tampa. The lads had better watch out. They'll soon be wielding calls about dodgy accident injuries from litigious Floridians.
There might be an explanation forthcoming if I click. Perhaps the foursome have day jobs after all.  Perhaps they are getting their undercover law degrees in the pic. But I am not going to click.

While on the subject of the lads above. I can't resist appending the following: 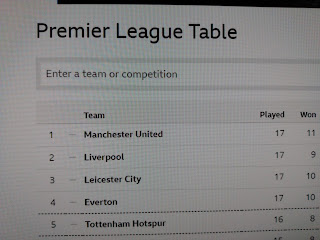 As I said to hubby, we probably have just 24 more hours to enjoy it.
Posted by Alenka at 10:39 AM