People in Britain used to talk about something called the "cricket test" (a controversial phrase coined back in the day by Conservative politician Norman Tebbit) suggesting that if you were an immigrant and supported your country of origin instead of England at cricket, you were deemed in some minds not to be really British. Well here we have the football test, as exemplified by hubby yesterday. The Buffalo Bills were playing a Florida team, the Miami Dolphins, in a match the significance of which was unclear to me but evidently extremely important. "Who are you going to support?" I asked him. He looked at me as if I was mad. "The Bills of course, what did you think?"  And he spent the afternoon deliriously thumping the air and screaming "Yessssssssss!!'  Observe the numbers below. The Bills earned 56 points! 56! Wow! Even I know that's one for the history books (The fish (sic) did get a few more later but the Bills still won magnificently.) 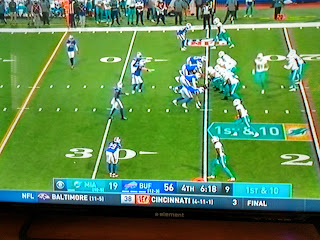 I'm happy for the Bills, who have some of the most loyal supporters in the country, who turn out to cheer them on in the most evil western New York snowstorms. They haven't had much good fortune over the years, though at least they were saved the ignominy of being sold to Canada. Now Bills fans can dare to hope that they might - just might, reach the Super Bowl. There are still some obstacles on the way but explaining them is above my pay grade.

So I can't blame hubby. I'm not about to start supporting the Tampa Bay Rowdies instead of the Red Devils either. Of course we're talking about proper football there. Those two sides are never likely to play each other.