I had long wanted to pay another visit to what's locally known as the Springville Flea Market. It's some 45 minutes drive northwards from us, in a country town on the way to Buffalo. It's actually much more than  a flea market. As you approach, cars line the road and people walk, weighed down with bags of produce - corn, melons, giant courgettes aka zucchini and summer squash. The forecourt - actually a bumpy slope - is full of haphazardly parked pickup trucks, kids and dogs weaving among them. I asked a man in a cowboy hat what sort of dog he had - a large, odd-looking beast with lithe body and long floppy ears. "A coon hound".  Atop the slope, red wooden buildings that seem unchanged for decades. Children retrieve rabbits in cardboard boxes pierced with holes, a large turkey sits in a cage, goats, sheep and tiny calves in dank pens. The animal auction in a room with tiered wooden seats around a small ring, started and ended early. Alongside the buildings stalls of perfect, plump plums, peppers and peaches. 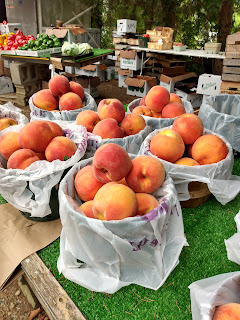 "We don't have so much today", the stallholder said. "We sent some of it south to help those people." I assume she meant Louisiana, reeling after Hurricane Ida.

And behind the buildings Amish ladies in their white caps and long blue Victorian dresses sell doughnuts of exquisite lightness. Or, if you prefer it, there's a truck selling that staple of American fairgrounds, fried dough. 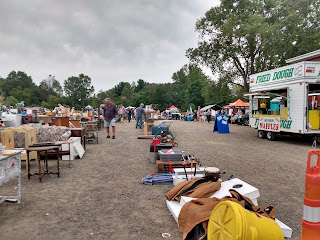 And stretching to the horizon, on tables and on the ground bric-a-brac of all kinds from bedsteads to broken hoovers to dolls houses to bicycles to antique fire extinguishers, interspersed with stalls of bargain toiletries, toys and pristine baseball caps saying "Jesus My Boss", sadly made in China. A  magnificently- moustached auctioneer wielding a portable microphone rattles his staccato spiel to a small crowd, "everything must go!" 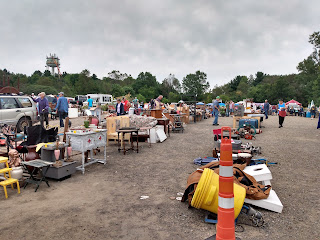 There are plants too and herbs and lettuces and tarps spread on the ground with unidentifiable objects, "Everything on here for a dollar!"   Something tells me we should have arrived at the crack of dawn to get the real bargains. 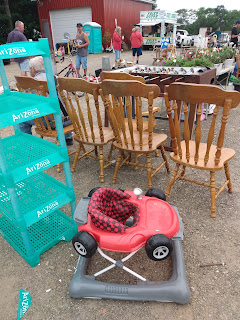 And  in the middle of it all, a white van stands draped in a massive banner suggesting we do something unprintable to the current President of the United States. Around it memorabilia extolling the virtues of his predecessor.

I catch a bit of conversation: "Afghanistan - yeah - well I say we should never have gone in there in the first place. But...."