Into the Mountains Part 1

Come early August Hubby and I headed off to the Adirondacks. These claim to be mountains, though they're nothing like the Alps. Still, they're gorgeous to look at, all forests and lakes, the place where the Gilded Age millionaires established huge estates with giant wooden houses they tweely called "camps"  The weather was gorgeous (never mind that the drought was ruining my Cattaraugus County garden - I tried not to think about it) and the drive, in hubby's vintage Volvo, most scenic. On the way we stopped to eat our sandwiches at Verona Beach on Oneida Lake, which has a spectacular lighthouse. 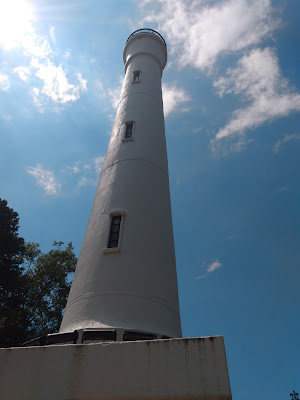 Yes it's a big enough lake to have a lighthouse. 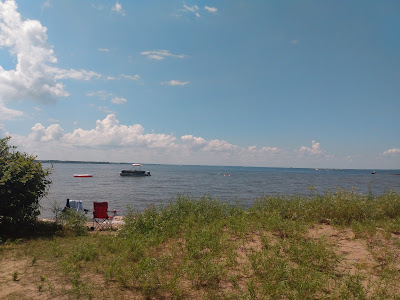 There were pink wooden houses that looked like the sort of places generations of families would come back to and make memories in on the edge of a little private beach. 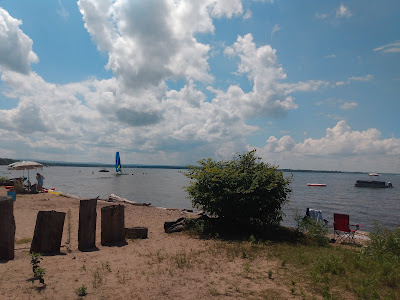 Children paddled and someone walked down with an armful of what we used to call rubber rings but are now probably called personal flotation devices - or something. Talk about memories...
On the other side of the car park, the owners of that particular house were making their political sympathies clear. 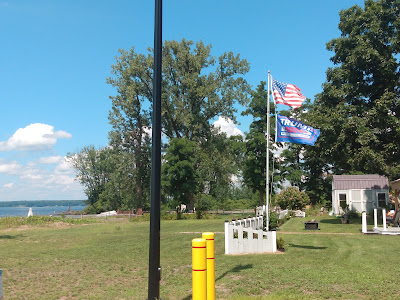 Then it was up into the hills, joining the inevitable stream of  traffic, dragging caravans, carrying kayaks and canoes and precariously suspended bikes. Just like the Lake District.  Except the Adirondack Park is 6 million acres - about then times as big.
We passed lake after lake, some with names - Otter Lake, Raquette Lake, Long Lake, Blue Mountain Lake, Tupper Lake some just numbers - I lost count. (The whole park has 10,000 lakes). Past endless campsites and car parks for trailheads with rustic signs and villages with milling tourists and rustic shops and rustic log cabins aka "cottages' and more lakes and more woods. There was a Golden Beach too and, seized with a desire to see it, we ended up stuck fast in a queue of mostly giant lumbering vehicles all waiting to check in. So we gave up on that one. But as we neared our destination, something surprising happened.
to be continued.
Posted by Alenka at 7:06 PM