On our magical country lane. 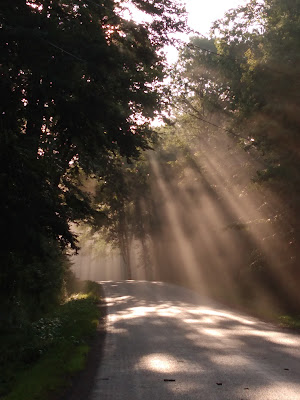 It always seems like an entry to fairyland and the stillness, when there aren't any pickup trucks going up and down, is unbelievable. Not even the sounds of the forest - chipmunks making kissing noises, a faraway woodpecker, a rustling of something in the bushes, the drip of water from the trees.

Walking down on an afternoon there were some interesting clouds. 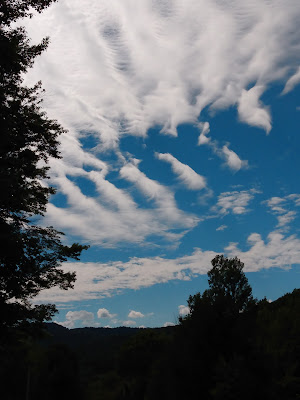 I had a debate with hubby whether this was a mackerel sky. "Mackerel sky, neither wet nor dry" is the not very helpful sailors' term, apparently. 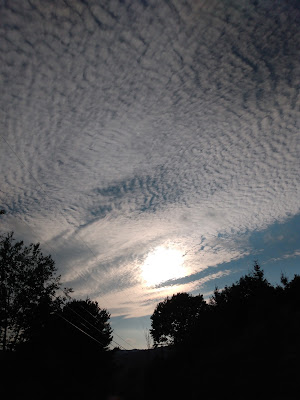 While below the roadside wild flowers run riot. It's chicory and Queen Anne's lace time right now. My paltry phone camera can't capture the unique bluey-purpleness of the chicory. 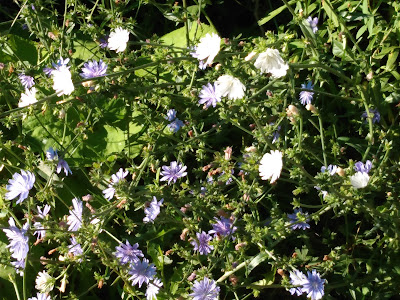 Meanwhile a mysterious new structure has appeared by the road.  Will they be selling something? And if so, what? I hope for million dollar pickle like the kind I bought once from an Amish lady in severe blue dress attached with pins, not vain buttons and mob cap, who apologised that it was her first attempt.  her effort was to die for but I never found her or any comparable pickle again. No I expect this, if anything at all, will be selling courgettes/zucchini and corn. 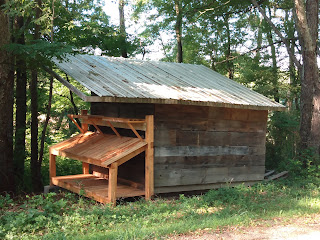 We got our first corn of the season this week. The early batch was heavenly, sweet and luscious. Poor Brits who have to get theirs from Waitrose. The best way with corn is to put the water on to boil and then pick it. We don't quite do that but buy it from a farmer who trundles up with a fresh batch several times a day. We could try growing it ourselves but it wouldn't stand a chance. A propos of which hubby was looking out of the front window and shouted, "Oh no!" Two cheeky deer were casing the joint. He chased them away but for how long?
Posted by Alenka at 7:38 PM