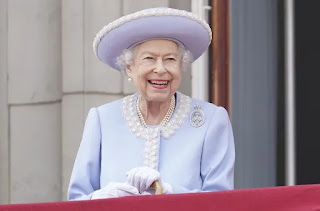 We arrived in London yesterday morning. All afternoon the news was coming from Balmoral that the Queen's condition was causing concern but that she was comfortable. But the BBC and Sky News teams were all wearing black, I suspect they' d been briefed. On the six o'clock news the BBC's royal correspondent said, oddly,  mid-interview "It's 6.30 now isn't it?"  A few minutes later the cameras started showing the flag over Buckingham Palace at half mast. Then came the announcement.

She was Queen all my life. One of my early memories, headlines saying "Ten Years a Queen". My sorrow is for her but not just for her - for all the memories of my life now passed.

As we listen to the unending tributes, one thing has struck me. This is possibly one of the biggest moment of unity the world has seen. Putin and Zelensky, Biden and Trump. Irish nationalists and unionists. Australian republicans, Canadian monarchists, the leaders of China and Taiwan. All have been sending glowing messages. Suddenly they have something to agree on. How can we follow up on that?

Thank you to all my American friends for your kind thoughts.

Now we'll have to get used to saying "King". No one knows what the future may bring.