And so to Vermont

From Saranac Lake in the Adirondacks it was a relatively short hop over Lake Champlain to Vermont. The Green Mountain state. (Got it? It took me a while.) Well not a hop exactly, as we took a car ferry. I always find it incongruous to have something as old-fashioned as a ferry in the world's superpower but there it was and as luck would have it, just boarding as we drove up. 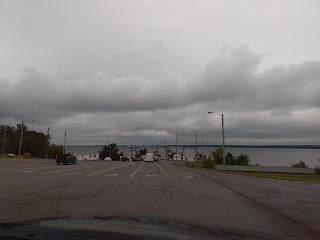 Approaching the distant shore - though it was indeed a short hop, just about fifteen minutes. 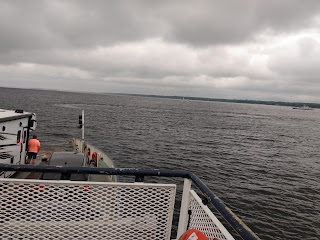 I've perceived, a big difference between this part of New York and Vermont. The latter is neater and tidier, seemingly more prosperous and choc-boxy. Even the cows grazing in the fields, busy generating Vermont's famous cheeses, look scrubbed and spotless. Vermonters are very green in all senses of the word. Interestingly its largest city, Burlington (not the capital - that's Montpelier) is very cosmopolitan, a university city welcoming of refugees and immigrants, large enough to be lively, small enough to be charming. And surrounded by gorgeous scenery. 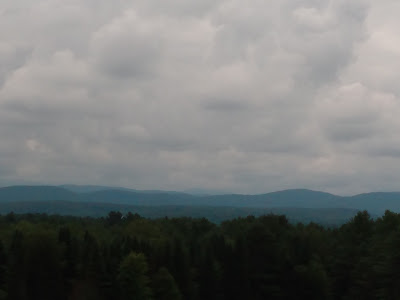 We'd been there a few times and this time were headed northwards to sister-in-law's new pad on the lake.  Wow - what a view! The weather was iffy but you get the picture. 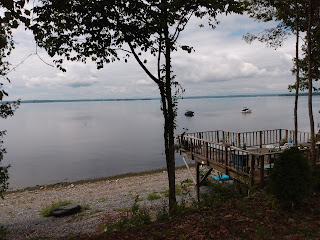 We also have a brother-in-law near Burlington. He's a phenomenal gardener and has always been my horticultural role model. He is now very much into the wild, natural look, of which I wholeheartedly approve. I wish I could get my garden phlox to look like that! 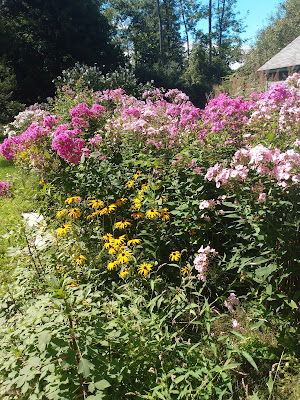 Not to mention the lilies. 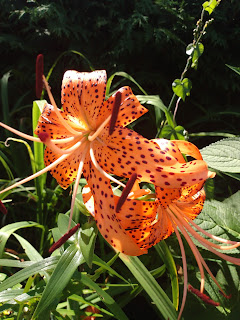 Well he's by the lake too and I expect they like the climate. 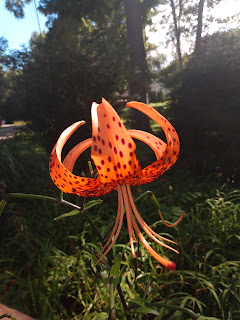 How's that for a back garden view? Green is the word all right! 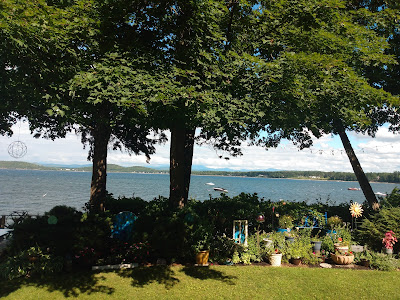 Another friend gallantly took us sailing, on a very superior catboat, somewhat bigger and more luxurious than Titanic 2. 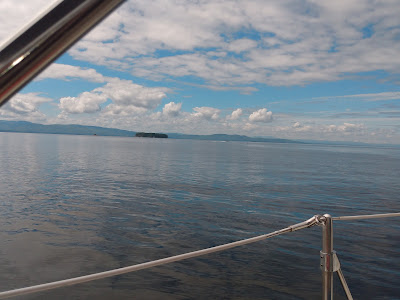 Somewhere hereabouts we passed Rock Dunder, an island that looks a bit like a ship, especially when it's foggy. Rather embarrassingly it's supposed to have got its name when the British mistakenly blasted at it during the Revolutionary War. Depending on who tells the story, either the officer, realising his mistake exclaimed,  "It's a rock, by Dunder!" or someone else yelled at him, "It's a rock, you Dunder!" Amazing to think of battles taking place in such a peaceful spot.
And finally another member of the family, our niece's rescue dog, Pierre. 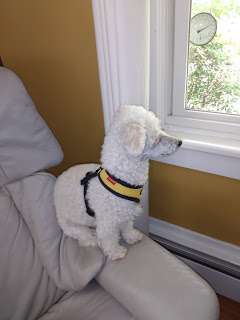 Well there's a lot of French influence in Vermont (clue to the name) Montreal not being too far away.
And then back to New York but over a bridge this time. 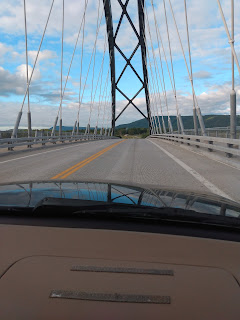 We had a last fleeting glimpse of the Adirondacks - but sadly one ambition remained unfulfilled. I didn't spot a single moose. There were plenty of likely swampy areas where the massive beasts apparently like to stand around chomping on waterlilies, but no luck. When she lived near downtown Burlington, sister-in-law saw a moose nonchalantly clip-clopping past behind her house but none of them would oblige for me. It's the same with bears. I am probably fated never to see one.
Posted by Alenka at 8:02 PM