In America it's what you put on pancakes. In Britain it's what we bring over as presents for our friends: maple syrup.

Walking through the snowy woods up our Western New York lane, you can see the sugar maples – so vividly red in the autumn - looking rather uncomfortable with plastic tubes plugged into their trunks. 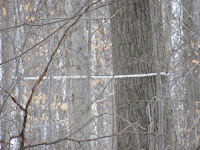 In the old days they used to collect the sap in buckets every day but now a network of the tubes feeds the syrup to tanks and thence to pans where the sap is boiled and reduced to make the syrup. It needs something like forty litres of sap to make just one litre of maple syrup. 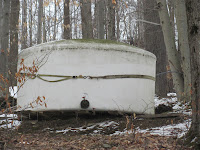 Our neighbour down the road, whose great-grandfather  bought the farm in 1890 and who owns the wooded hill above our house, makes his own maple syrup. During late February and March you can see the wooden “sugar shack” behind the house puffing smoke like a demented steam engine.  The conditions aren't always ideal. As Mark points out,   “ You need freezing nights and warm, sunny says – warm weather, preferably sunshine, makes the sap rise into the branches and the cold nights send it back down to the trunk, where you can collect it.”
It also depends on whether the trees are facing south or north, the type of soil, the height above sea-level.. It is not an exact science, more an exciting mix of skill and chance.  “Just when you’ve got it figured out, it goes the other way!”
Mark doesn't make syrup on a grand commercial scale – just for the family - but that doesn’t make him any less enthusiastic – probably more.  “First, It’s the best sugar you can get – and during the Depression it was our main source of sugar - second it’s such a unique product – you can’t just make it any old time. You only have that little window every year.”
He boils the sap over a wood fire “It gives it a better taste –more mapley you know”.  But the most important thing, he says, is that it’s “about family – family camaraderie. I would spend more time with my father during those two months of sugaring than at any other time of year and now it’s the same with my own children.”
There was another maple syrup farm up the road - you could buy the stuff in bottles from the local Park and Shop and it actually had the name of our road on it - which made it a pretty good present. But sadly, like many Western New Yorkers, those people have retired to warmer climes. Though we still have one bottle with the label, which we're keeping selfishly, rather like a vintage wine that collectors can't bring themselves to drink.
Several places lay claim to the best maple syrup in the world - Canada and Vermont, for example. But there's nothing like knowing the actual trees it came from.
Posted by Alenka at 4:10 PM