Where's the justice? By rights, after shivering for two weeks in an unusually cold British March, I should be able to come back to an unusually warm Western New York one. No such luck. Currently there's a "Lake Effect" snow warning for Cattaraugus County until thursday morning. (Lake effect snow being caused by cold air blowing across the warmer waters of the Great Lakes). It's been coming down thickly all day but not settling as much as it would have done last month.  Still, it's snow boots and slush and filthy, salt-encrusted cars for the foreseeable future at least.
The sunset over snowy fields on the drive back from Buffalo airport was beautiful though: 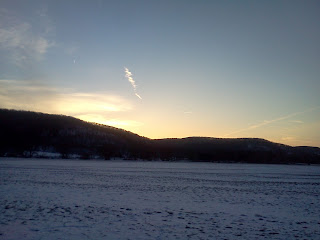 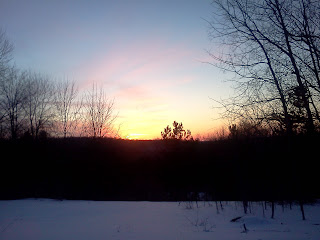