What Brings You to Our Store?

We have just ordered a chair to match a sofa we bought a few years ago, which has brought back memories of the pleasures of buying furniture in America. At that time, I penned the following, from which absolutely nothing has changed... 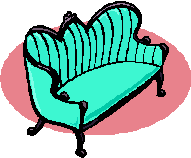 Last weekend, the snow was falling in flurries, the roads were wet, the skies were grey – and we were out looking for a new sofa.  Our bit of Western New York has a dearth of good furniture shops, which is frustrating to someone used to the cornucopia that is London. Here, all sofas seem to have curly-wurly arms - you can’t find one with straight arms for love or money. It’s either that, or it’s overstuffed in brocade with fringes, like a whale in a French corset.  So we set out, not with much hope of actually finding anything we liked but to get ideas. We’ve been getting ideas for some months now. “We’re just getting ideas” is the method hubby uses to fend off the sales personnel who descend like vultures whenever you enter a Western New York furniture shop.
Our furniture shopping scenario invariably goes something like this. We stop outside yet another store, out on some billboard-infested arterial road, eye up the vast concrete building and look at each other.  “Sure you want to do this?”
“We-ell…not sure”
“Come on, at least we’ll be out of the cold”
So we march inside, mentally counting the seconds we’re left on our own before the first vulture circles and dives. No matter how cavernous the store and how far away he or she is – he or she will spot us. And come striding over with the sort of gritty determination that won the West.
“Hi Folks, how’re you doing today?”
“Good – and yourself”, says hubby well-trained in the drill.
“I’m good.  And what brings you folks to our store today?”
The first time I heard this question, I thought it was original. The fifth time I realised it wasn’t. It is a crucial part of every western New York salesman’s training course.
It’s at this point – while I wonder idly what would happen if I answered, “Oh, just a spot of shoplifting” -  that hubby says firmly, “We’re getting ideas”.  This sometimes works; mostly not. The important thing is to keep walking. We once shook an assistant off but this is rare.  Usually, the vulture quickly metamorphoses into a  bloodhound. “Would that be ideas for anything in particular?” we hear behind us. How I sometimes miss shopping back home, where you can’t make the assistant get off the phone so much as to look at you.

We try a spot of ducking and weaving between the curly-wurly arms, but s/he sticks to our tails, shifting to a new approach.
“Are you folks familiar with our store?”
I want to say that I am familiar with their store, not because I’ve been in it before but because it’s exactly like every other furniture store I’ve ever been to in America. But I lack the vocabulary.
“Well let me just tell you that today we have a special promotion …..
my name is Joe/Bill/Kelly and here’s my card, so just let me know if I can help you.” 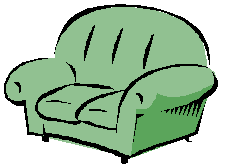 This signals a brief respite and the trick is to use this respite to race around as quickly as possible, verifying that there is indeed no sofa in the shop that doesn’t have curly-wurly arms and then finding the most direct route to the exit. If you hesitate at any piece of furniture, your weakness will immediately be spotted. Last time, we made the mistake of halting to stare in horrified fascination at a sofa that incorporated a plush fold-down tray with his-and-hers drinks holders. In no time at all, we felt heavy breathing and Joe/Bill/Kelly was at our side. “Now that’s a beautiful piece, folks; I’m not a sharp salesman but I’ve been in this business for thirty-five years and I can tell you you won’t get a deal like that anywhere else in New York State.”
“Thank you” said hubby. “That’s given us lots of ideas.”
Posted by Alenka at 7:08 AM