On the Road 6: An Unexpected Purchase

Travelling back from Florida by car has its advantages.   You don’t have to worry about flight delays or taking your shoes off in Security, or having too many suitcases, or putting your liquids in those miserable Ziploc bags. No, you just throw everything in willy-nilly and set off without  a care, save negotiating roads clogged with the hordes trying to head north in the spring.
And there’s always room to add a few souvenirs en route. This can sometimes  get a little out of hand.  I once brought hubby back a bag of Florida oranges which were marmalade by the time we reached western New York.
This time,  sister-in-law and I left  with good intentions.  Well you know what they say about the road to hell. We’d packed the car efficiently, we had our picnic cooler – no American  car traveller  is ever without one - which is why American hotels always have those noisy ice machines, inevitably right next door to your room.  We had supplies for the journey and  resolved not to add to the load – unless it was something we really, really needed.     Trouble is, there are plenty of places at the American roadside that would like nothing better than to tempt you out of your money - and your common sense. 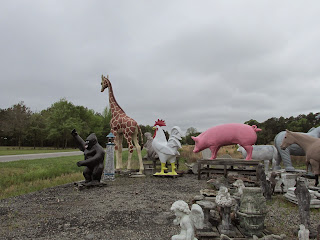 We were in the middle of Then, further along,  in the middle of nowhere, we did a double take.  There, by the wayside, were  almost lifesize models of  a  giraffe, a hippo and a gorilla.  With a screech of brakes and the familiar, “I gotta see this!”, sister-in-law swerved through the gate. 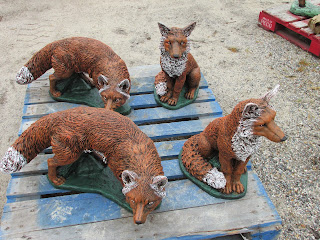 It was a garden ornaments place. 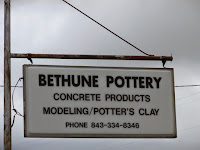 But this was America and there were acres of them. 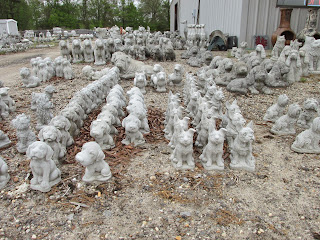 Acres of bunnies, acres of puppies, 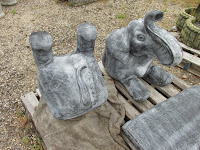 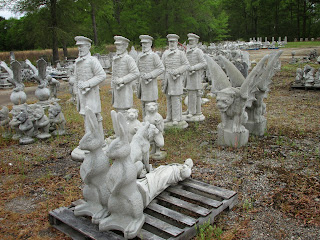 “You bet!” said the man, “People love  ‘em in their yards”.  I was speechless.  Then, to be polite, I asked, “Do you have any birdbaths?”
“Sure do, Ma’am!”
It was then that I saw it.  Not too plain, not too ornate,  entwined with a vine and butterflies, the most exquisite birdbath. 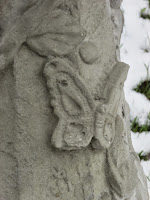 But here we were still in the South with a full car.
“If you can it get into the car,” I said to the man, “I’ll take it.
“No problem!”  He huffed, puffed, pushed, shoved and twisted himself and the birdbath into unimaginable contortions,  then finally wiped his hands, satisfied.  The birdbath was squeezed behind the passenger seat.  I had to spend the rest of the trip sitting bolt upright with my legs bent but hey, what’s a little suffering for an object of beauty I’d never have got on a plane?

And here it is in the spring snow of western New York. 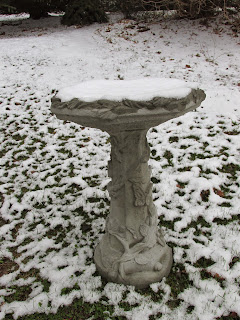