Wow, what's the Pope doing going to Philly and Washington and the Big Apple when he could come to Olean?   St Mary of the Angels has got to be one of the loveliest churches in western New York, a miniature Gothic cathedral, designed by French-born architect Emile Uhlrich. Ah for the old days when churches were built to look like churches and not gasworks. 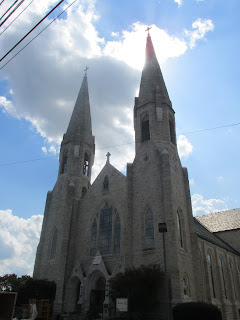 St Mary's is about to celebrate its centenary. It's always been beautiful, thanks to some sensible parish priests who didn't try to modernise, aka wreckovate it. Now there's been some more restoration. I sneaked in by a side door and managed to grab some pictures, just as they were removing the scaffolding. "Ah the first photos!" one of the workman quipped. So here you are -  a scoop. 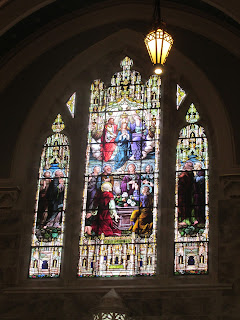 The church and especially the stained glass was always spectacular but now there seems a new, fresh glow about the place. 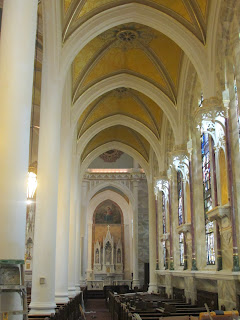 A positive radiance in fact. 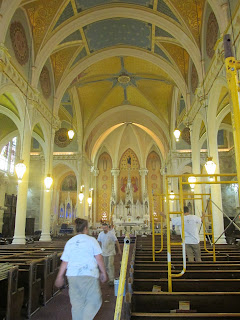 Not many churches where you can see the old high altar and altar rail still intact. 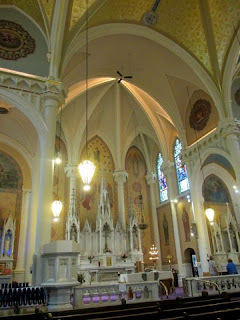 But what really bowled me over was the ceiling - all blue and gold, apparently restored to its original state. 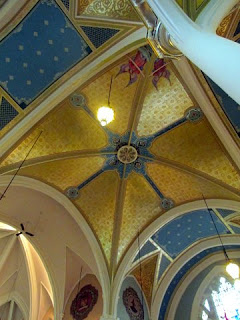 I hope it's all still there in another hundred years.
Posted by Alenka at 3:39 PM