Flashback to Florida: Horses for Courses

As you read this, the blog has winged its way back up to the frozen north, though not so frozen at the moment, which is a great relief. But there are still some memories of Florida to (as the Americans say) share with you...

Take the day we went to the Horse Show. I was pleasantly surprised to find Fox Lea Farm, an interesting equestrian venue, very near us. I used to indulge in this sort of thing back in the day, so I was keen to see how it differed from the good old British horse show.  This was a rather more serious affair than Cattaraugus County Fair The day we went, there was no showjumping, which is fine for us connoisseurs. We get to be the only spectators apart from friends and family. There was a type of American version of a working hunter class. (A hunter, in this case, being a horse used for fox-hunting, though I wonder how many of these glossy specimens would be allowed on a mad chase across the muddy countryside, just as car show cars spend their lives being carried in trailers.) 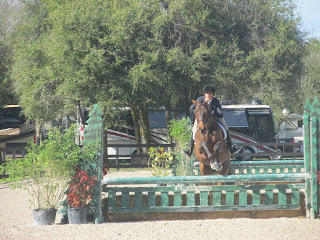 I have bittersweet memories of working hunter classes, which are  judged on style and appearance as well as performance.  At one infamous one -well actually it was a working pony class, Tara, my Irish mare of blessed memory refused the first (tiny) jump which was us out of the reckoning.  These competitors were far slicker, admirably plaited and polished. I've noticed that American riders are sticklers for style, heels well down, toes slightly turned out, very conscious of the position of their hands. Note they were riding "English" which I believe is considered posher than "Western"  - a whole different discipline, judged on suitability for roping cattle, rounding up outlaws etc. 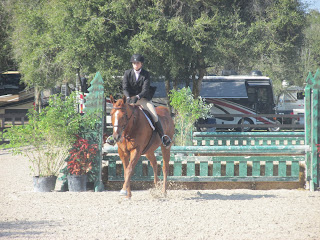 They have the full beauty treatment beforehand - and that's just the horses.. 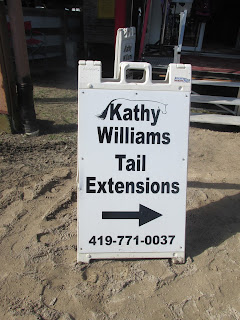 The show ring too 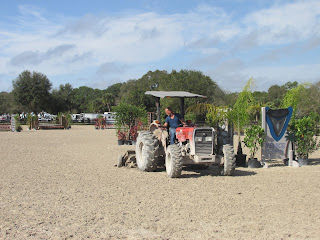 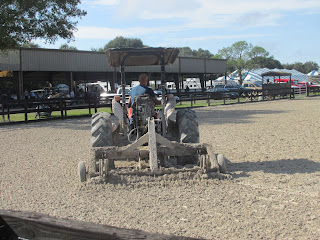 Like American horse races, they seem to prefer dirt to grass, though there was a grass "Grand Prix" ring. It reminded me of Hickstead showground in Sussex in its early days - complete with grassy bank, though the grassy bank was a lot lower than Hickstead's, possibly to comply with Health and Safety.

I noticed the competitors and officials saved their boot leather by travelling around in golf carts. I did actually see a horse being exercised behind a golf cart but didn't have my camera handy, so you'll have to use your imagination. 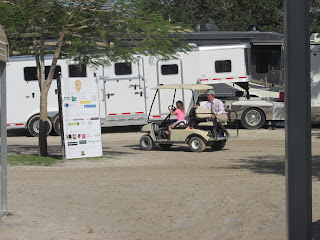 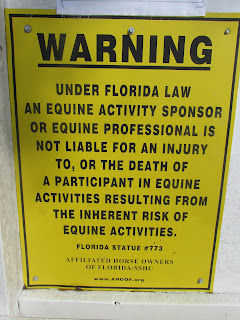 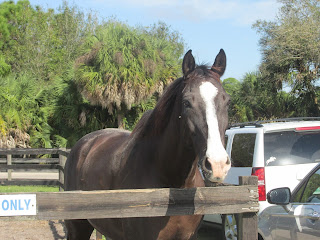 It was all great fun and made me feel quite nostalgic. I hope we'll be back. 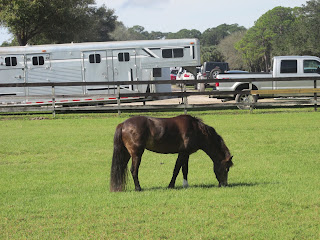