The garden was in the midst of a glorious, endless summer, Not quite Garden Walk standard but looking pretty chipper, though I say it myself.  Here's Jack the Clematis showing off 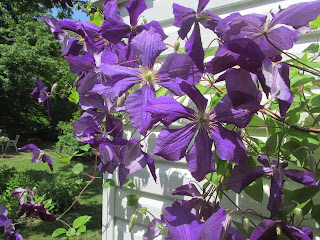 And some brazen lilies I'd forgotten I planted 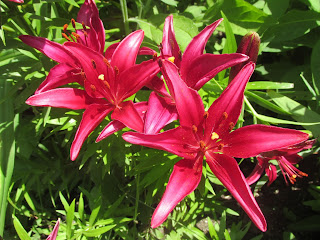 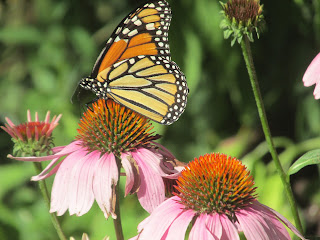 My only grumble - I had to get up early to water. It's been a very dry summer. Hubby remarked that there's been no sound of insects chirping at night. All those biblical hordes of cicadas - the kind that emerge only every seventeen years - which we'd been threatened with never materialised either.

Well, as they say, be careful what you wish for. The weather forecast warned of "severe thunderstorms" and something called "small hail". I didn't like the sound of that. This morning was close and muggy, almost suffocating - like trying to swim through cotton wool. Then all hell broke loose. 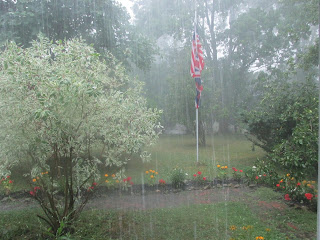 Niagara Falls had changed location and was descending from the gutters 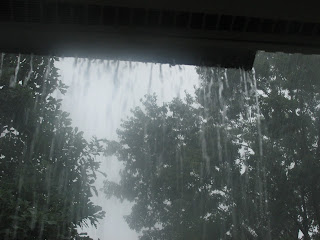 Right onto my poor flower bed 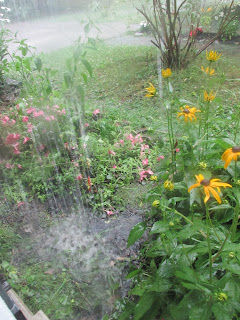 While the garden path turned into a lake 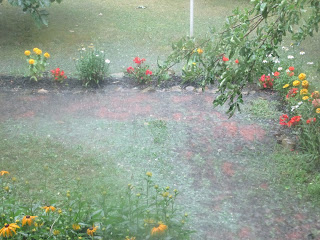 Quite impressionist - it just lacked a water lily or two 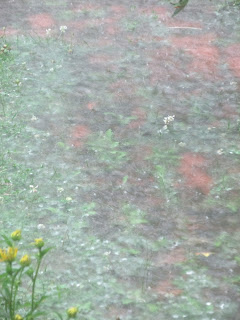 And when the sun came out and I ventured out back, 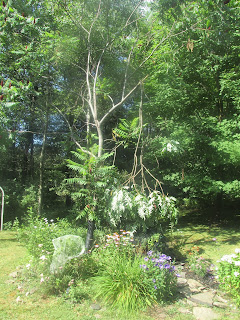 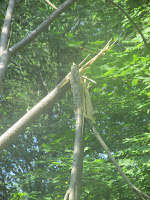 Which had already been struck by lightning once. Old sayings obviously don't apply here. Except it probably wasn't lightning that did for it this time. Maybe it was small hail.
Meanwhile, a horrendous noise started up on the lane outside. I noticed a flash of yellow going back and forth, back and forth and that infernal beeping of a reversing heavy vehicle. Eventually I had enough and marched out to protest - to see the vehicle joined by a chap with a handheld device that looked like a large hoover. "Just clearing the stones off the road", he said. I looked and couldn't see much except a lot of tiny pebbles. The sort you see on most unmade roads around here. Anyway he didn't have much success in hoovering them up and departed soon afterwards, probably to warn his friends that the British were coming. Your tax dollars at work, as hubby would say.
Posted by Alenka at 9:16 PM